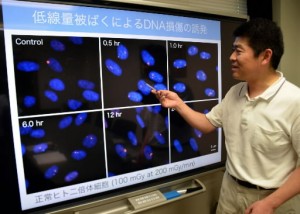 Modern science has yet to clarify the effects of low-level radiation on the human body. This series covers the persistent efforts, and differing views, of scientists researching this “gray area.”

How does radiation damage human health? How does it cause cancer in human beings? Determining the effects of exposure to low-level radiation at the cellular level involves researching the damage and repair of DNA in the cellular nucleus.

Glowing red dots can be seen in a collection of cultured human cells when zooming in with an electron microscope. “These red dots represent the double strand break of DNA,” said Keiji Suzuki, an associate professor of radiation biology at Nagasaki University’s Atomic Bomb Disease Institute, pointing at them on the monitor screen. The display monitor shows changes in the protein at the breakage points using a special dyeing technique.

The double strand break is a phenomenon in which the two chromosomes of a double-helix structured DNA are both broken. Professor Suzuki’s study shows that, in a cell exposed to low level radiation of 100 milligray (mGy), the double strand break occurred in four locations. In a cell exposed to radiation of 1 gray, or 10 times 100 mGy, the break occurred in about 40 locations. So the number of breaks in the DNA is in linear proportion to the radiation dose.

Based on Professor Suzuki’s study, the level of damage to the body depends on the radiation dose. However, this is not the final conclusion. Cells have the ability to repair themselves when their DNA becomes broken. Chronological observation of the red dots in the images on the screen shows that the number of the red dots indicating cells exposed to 100 mGy of radiation increased over time. However, 24 hours later, the number returned to the original level before the radiation exposure. In contrast, however, in the case of cells exposed to 250 mGy of radiation, there were more red dots after 24 hours than before radiation exposure.

Professor Suzuki says that, in the case of a high level of exposure, the DNA cannot fully repair itself, but when exposed to radiation of about 100 mGy, the DNA can repair itself in one day. He adds that the principle of high-level radiation, where the level of DNA damage increases in proportion to the radiation dose, does not apply to cases of low-level radiation, and therefore he stresses that, from a biological perspective, the DNA damage caused by radiation is not linearly proportionate to the radiation dose.

However, there is a notion that, even after the DNA damage has repaired itself, a DNA linkage error in the repair process can result in cellular mutation and eventually the development of cancer.

Professor Suzuki also notes that ordinary cellular activities which produce energy for our daily lives do damage to the DNA. The level of damage to the DNA resulting from this process is equivalent to the level of damage caused by annual exposure to radiation of a maximum of 900 millisieverts (mSv). He counters the notion mentioned above, saying, “In our daily lives, the human body repeats the DNA damage and repair process more frequently than when exposed to low levels of radiation. We cannot assert that a linkage error (in the repair process) increases the risk of cancer.”

In response to Professor Suzuki’s assertion, Toshihiro Takatsuji, a professor at the Faculty of Environmental Studies of Nagasaki University disagrees from a physics standpoint, saying that the radiation damage to DNA is concentrated within a limited area, like so-called hot spots. Because the concentration of double strand breaks easily causes linkage errors in the DNA repair process, he says, “In studying the damage to the DNA, we need to consider not only the time axis, such as the quantity change, but also the spatial axis,” and adds that the damage caused by radiation is different from the damage that occurs in the course of one’s daily life.

However, according to Professor Suzuki, even though it is known that, in the case of high levels of radiation, severe DNA damage occurs, especially in some spots, no experiments have verified that the same phenomenon occurs at low levels of radiation. He views the differences in theory between himself and Professor Takatsuji as a conflict between a theorist’s assertion and a biologist’s experimental study.