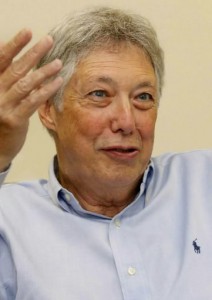 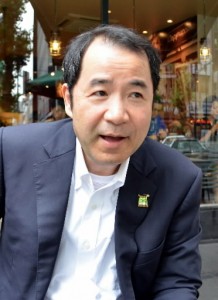 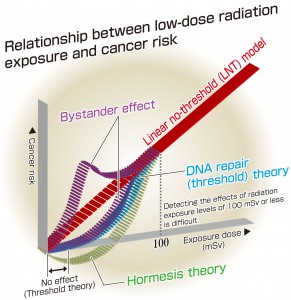 Relationship to risk of cancer

No matter how small the level of radiation is, exposure to radiation will have an adverse effect on human health in proportion to this level. Under this assumption, there is no numerical value, or threshold, below which safety can be ensured. In line with this idea, the so-called linear non-threshold (LNT) model has been adopted globally as a means of protecting the human body from exposure to radiation. Nevertheless, researchers are deeply divided over the actual effects of radiation exposure: some support the LNT model as a useful scientific assumption, while others question its validity. Does some kind of “boundary” exist where radiation exposure levels change from being safe to unsafe with regard to human health? Studies and discussions on the effects of low-level radiation are ongoing.

The Japan Physics Society, a group for radiation protection scientists, held a meeting in the city of Hirosaki, Aomori Prefecture, at the end of June to present their research results. During the panel discussion, they talked about sharing their views on the effects of exposure to low-level radiation on human health.

Yoshihisa Matsumoto, an associate professor of radiation science at the Tokyo Institute of Technology, stressed that no consensus has yet been reached as to whether there is an actual threshold level of radiation at which the development of cancer is triggered. Another panelist said that the LNT model is only effective for radiation protection.

A follow-up survey of some 120,000 A-bomb survivors conducted by the Radiation Effects Research Foundation (RERF), located in Naka Ward, Hiroshima, has yet to show the exact health effects of radiation exposure at a level of 100 mSv or less. This is because the effects of low-level radiation on human health are weaker than the effects of smoking, diet, and other lifestyle habits.

Research on DNA damage and repair that focuses on the ability of cells to repair themselves indicates that exposure to radiation below a certain level has no negative effects on human health. In the past, studies on the hormesis theory, which claims that “radiation at very small doses can be beneficial to human health,” were frequently carried out. To the contrary, based on the bystander effect in which irradiated cells may damage neighboring cells, there is the view that low-level radiation is, indeed, dangerous to human health.

Reports prepared by various overseas authoritative research institutes do not provide any consensus or agreement with regard to the effects of low-level radiation on human health.

In contrast, a report on low-level radiation exposure issued in 2006 by a committee of the U.S. National Academy of Sciences concluded that, as a result of an examination of epidemiology data and data obtained from animal experiments, they consider it scientifically reasonable to stand by the LNT model for low-dose radiation cases.

Last year, an epidemiology thesis publicized by a research team from the International Agency for Research on Cancer, in Lyon, France, drew attention. The team analyzed the relationship between the radiation exposure levels and the health conditions of some 300,000 people who have worked at the nuclear power plants and nuclear fuel facilities in France, the U.K., and the U.S. over a period of one year. The report said that cancers and leukemia were observed in workers whose radiation exposure level was 100 mSv or less, and concluded their paper by expressing support for the LNT model.

I was involved in the 2006 report by the U.S. National Academy of Sciences as a researcher of radiation oncology at Colorado State University and I served as an expert commission member. Regarding the relationship between low-dose radiation exposure and the risk of cancer, we concluded that the LNT model is scientifically reasonable based on epidemiology studies, animal experiments, and cancer development mechanism studies. So, it’s not that we should, just in case, adopt the LNT model, which might not be correct.

In the course of reaching this conclusion, the most reliable grounds that support our position are the data from RERF’s Life Span Study (LSS). To reach a better conclusion, we also examined the data obtained from workers at nuclear weapons related facilities, epidemiological data on medical exposures, and experimental data obtained from animal studies.

We haven’t, however, been able to measure the health effects of very small-dose exposures. Therefore, we obtained the examination results theoretically from reliable data.

Biologically speaking, DNA can be damaged irreparably when even minute levels of radiation go through cells. Although the steps leading from that damage to cancer are very complicated, it is impossible to eliminate completely the possibility of damaged DNA triggering cancer.

For these reasons, we concluded that the finding of a linear relationship between the level of radiation exposure and the risk of cancer, which is clear in the survivors’ data, can be applied to a level of low-dose radiation exposure of 100 mSv or less.

Nevertheless, this prompted a backlash from threshold supporters. Meanwhile, some say that the report underestimates the facts of how cancer develops, because, in our report, we estimated that just one person out of 100 gets cancer from exposure to radiation, while 42 get cancer from smoking or various other factors. While the study of radiation is a science, it is also a political issue and there are some discussions that seem to have arrived at their conclusion from the very beginning.

Michiaki Kai, professor at Oita University of Nursing and Health Sciences: Recognize both reality and values

The development of the LNT theory coincided with the study of the risks of radiation to human health, but the LNT theory is not used only for radiation risk. There are also other applications. One example is the application for the risk of benzene, a carcinogen contained in gasoline. The Ministry of the Environment has applied the LNT theory for benzene control standards. One reason people have a greater fear of radiation than other substances is because radiation is relatively easy to measure in even minute levels using radiation measuring devices that can easily be obtained.

It is very difficult to completely dismiss the LNT theory and create a new threshold model which would indicate a limit that can ensure safety. This is because scientists cannot prove where the threshold is. If they cannot create a new model, there is no way other than to look at things based on the LNT model.

From the viewpoint of scientists, I feel that we have gotten heavily involved in research that is focused on the LNT assumption. Supporters and non-supporters of the LNT model have always been critical of one another, clinging to the debate over whether or not a threshold actually exists. If scientists insist that “the LNT theory is not correct,” without providing another precise threshold, people will become confused.

In the past, when I addressed the low-dose radiation issue, I compared the risks caused by radiation with those caused by smoking and, as a consequence, I was harshly criticized. With respect to human health, there is no problem in making a comparison of these risks. However, behind the argument regarding radiation exposure and the risk of cancer, there are various complicated factors such as the pros and cons of nuclear energy and the personal preference of smoking, and I realized that it was difficult to discuss these issues only from a scientific perspective.

I will not deny the idea that research into radiation effects has been carried out simultaneously with the promotion of the use of nuclear energy. It is natural to conduct a safety study if we use nuclear energy. However, the effects of low-dose radiation cannot be discussed only from a scientific point of view. To get to the core of the low-dose radiation issue, we have to recognize that this issue is intricately intertwined with society and its sense of values. If we cannot appreciate that, we won’t be able to ease people’s fear or anxiety over radiation.