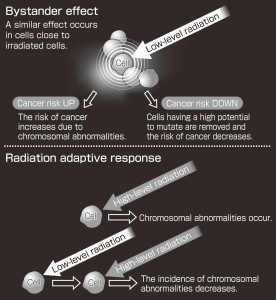 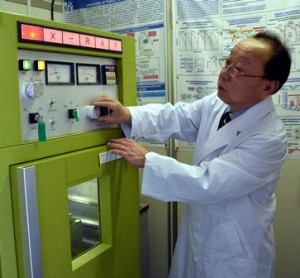 Search by scientists: Why abnormalities occur in human cells

Chromosomal abnormalities can occur in cells that are located close to irradiated cells even if they are not directly exposed to radiation. This unusual experimental outcome was reported by a team of researchers from Harvard University in 1992.

Using the principle of a camera shutter lens, alpha rays, which have a weak penetrating power, were emitted to cultivated cells for a maximum of two seconds. Although only one percent of the cells were exposed to radiation, chromosomal abnormalities occurred at more than twice the predicted rate.

This phenomenon was later referred to as the “bystander effect” and it is peculiar to low-level radiation exposure. Hideki Matsumoto, an associate professor of radiation biology at the University of Fukui Faculty of Medical Sciences, has studied the mechanism that causes this phenomenon for about 20 years. He has concluded that the bystander effect is “triggered by nitric oxide” and he has also been working on a way to apply this effect to a radioprotector.

Mr. Matsumoto used a microbeam that can zero in on cells one by one to reproduce the bystander effect in cultivated human cells. As a result of this experiment, he found that nitric oxide produced in all irradiated cells penetrated nearby cells, which triggered the bystander effect.

Mr. Matsumoto then focused on a protective phenomenon, the so-called “radiation adaptive response,” which is induced by exposure to low-level radiation. According to the theory underlying this adaptive response, low-dose preirradiation prior to high-dose irradiation reduces damage to the body. As vaccination improves immunity in the body’s immune system to diseases, so cells acquire radiation resistance.

Mr. Matsumoto used medication for treating angina that induces the production of nitric oxide in the body. In experiments that he carried out in mice, he ascertained that the cells which induce the bystander effect acquire radiation resistance without being exposed to low-level radiation. Mr. Matsumoto argues that if this adaptive response can be used in a radioprotector or palliative, it will be possible to protect normal, healthy body tissue of patients who undergo radiation therapy for cancer.

Irradiation of a few micrometers

Recalling the study he has carried out since the 1990s, Mr. Matsumoto, who is also the president of the Japan Microbeam Biology Research Association, stresses the significant advances in technology that have aided his work. The research itself has made tremendous progress since 1992 when the bystander effect was first discovered, and, as a result of these technological advancements, a microbeam radiation device was developed for more detailed analysis. The latest model of this device can send radiation of just a few micrometers (a millionth of a meter) only to the nucleus or cytoplasm of a cell.

For exposure to low-level radiation, Mr. Matsumoto has found that even radiation of as little as 100 milligreys causes a reaction to the cell. But at the same time he admits that there is no technological sensitivity that can detect the effect of low-level radiation. Based on his experiences as a scientist, he believes he should not seek to detect something that cannot yet be observed. He anticipates new technological advances will make this goal possible.