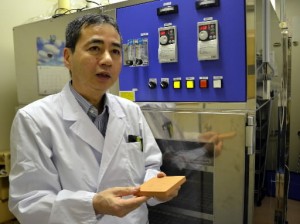 “All research on radiation hormesis has now been halted.” The notice to this effect appeared on the website of the Central Research Institute of Electric Power Industry (CRIEPI, Tokyo). Radiation hormesis is the hypothesis that minute levels of radiation are beneficial for boosting the body’s immune system.

CRIEPI, an institute jointly funded by Japan’s power companies, was a pioneer in the research on hormesis. In 1984, when a young researcher discovered an American scientist’s thesis on hormesis, CRIEPI launched its research. The institute carried out experiments to find out the effects of hormesis on inhibiting cancer and extending life expectancy.

Kazuo Yoshida, the president of CRIEPI’s Radiation Safety Research Center, explained the background of hormesis research back then by saying that hormesis was credited with allowing a threshold to be set: the maximum radiation level that will not adversely affect human health. For the power companies which sponsored this research, it was a welcome effort that could lead to reducing the cost of generating nuclear energy.

As a result of repeated experiments, it was shown that a certain favorable effect was observed when mice in a weak state were irradiated. However, considering the risk throughout one’s life and the condition where a healthy subject would be used, it was difficult to incorporate the hormesis theory into the general standards for radiation protection.

As the popularity of research on hormesis waned in the 2000s, the nuclear accident occurred at the Fukushima No. 1 (Daiichi) nuclear power plant, run by the Tokyo Electric Power Company (TEPCO), and research on hormesis was criticized by advocates calling for nuclear energy to be abandoned. In addition, the hormesis theory was being used for advertising health-enhancing products, and as a result CRIEPI decided to put an end to all hormesis research.

With regard to the significance of the hormesis research conducted by CRIEPI, Mr. Yoshida summarized that the hormesis theory caused controversy by asserting that “low-dose radiation produces different effects from that of high-dose radiation.” Nevertheless, he expressed mixed feelings, stressing that he could not deny the hormesis effect itself.

Hormesis was at the mercy of the times and expectations of the people involved. The former young researcher who discovered the buried hormesis thesis still continues his investigations at the Medical School of Okayama University. Kiyonori Yamaoka, now a professor of radiological health science, is studying the effect of low-dose radiation using radon.

Looking back on that time, Mr. Yamaoka explains that the term “radiation hormesis” itself led to misunderstanding. Citing aerobic exercise, sun bathing, and hot-spring bathing, he says that there is a notion that moderate stimuli activate physiological functions while excessive stimuli are harmful to health, and he adds that this is true of radiation, but only radiation hormesis was considered special.

In 1939, Okayama University opened a sanatorium in the Misasa hot spring district, located in Tottori Prefecture, an area that was rich in radon. The sanatorium later changed its name several times, to the Radioactive Spring Research Center and other monikers, as it studied the effects of radon hot springs. Mr. Yamaoka was transferred from CRIEPI to the research center in Misasa in 1999. At the Misasa radon effects research facility, which was jointly set up by Okayama University and the Japan Atomic Energy Agency, he worked on experiments in which mice were made to inhale radon.

After the Fukushima nuclear accident, however, Mr. Yamaoka’s study was sometimes criticized as absurd. There are now less than 10 researchers in Japan who study hormesis and continue to publish papers on the subject. Mr. Yamaoka says, “It has been five years since the Fukushima nuclear accident, and people are coming to think more calmly about the effects of radiation. I’d like to pass on this research to the next generation so that the effects of radiation on human health can be established.”