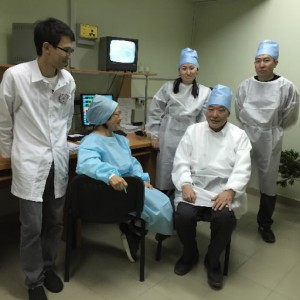 Search by scientists: Probing the gap between reality and science

Even those who were exposed to the radiation released by the atomic bomb at a distance of 2 kilometers from the hypocenter experienced such acute symptoms of radiation sickness as hair loss. Some A-bomb survivors whose level of radiation exposure was as small as 10 mSv suffered fatigue and exhaustion soon after the bombing. “Direct exposure to radiation could not possibly be the only thing that caused such symptoms. There must be other factors as well,” said Masaharu Hoshi, a professor emeritus of radiation biology and physics at Hiroshima University.

Both A-bomb survivors in Hiroshima and Nagasaki and residents in the region of the Semipalatinsk nuclear test site (in today’s Kazakhstan), the largest nuclear test site maintained by the former Soviet Union, still suffer from diseases caused by their exposure to radiation. Professor Hoshi has long made investigations within the gap that lies between the reality of people’s suffering and what science has achieved to date. He is now focusing his time and effort on pursuing new experiments with professors at Hiroshima University and universities in Kazakhstan.

With regard to the atomic bombs, scientists have focused on the effects of “external radiation” in which people were directly exposed to radiation, the massive release of gamma rays in particular. However, Professor Hoshi suspects that the effects of “internal exposure,” where radioactive dust and fine particles are inhaled through the mouth and nose, are much more serious than previously thought.

To probe this suspicion, he looked at the clay walls found in most wooden houses around the time the atomic bomb was dropped on Hiroshima. He turned to the clay walls after finding that the soil beneath them included a large amount of manganese dioxide.

When the atomic bomb exploded, the manganese in the clay was hit by neutrons, turning it radioactive. At the same time, the massive blast lifted the manganese into the air in the form of dust particles. Radioactive manganese emits beta rays which have a weaker penetrating power than that of gamma rays. If these beta rays become dispersed inside the human body, the body suffers relatively serious damage in limited locations, even though the affected area is small.

The half-life of radioactive manganese is only 2.6 hours, and the trace of exposure virtually disappears in a day. This is one reason why manganese has not drawn much attention.

Professor Hoshi and others have conducted a series of experiments on animals in Kazakhstan to replicate what happened in the hypocenter area in the immediate aftermath of the atomic bombing. In their experiments, they injected powdered manganese, made radioactive with neutrons, into an enclosed space containing rats. After this injection, the rats were dissected to measure their internal radiation dose and to examine the damage to their internal organs. They were also studied for signs of “weariness” from the quantity of motion.

The results of these experiments show that, when the external radiation dose was a maximum of 5.75 mGy, the internal exposure to the rats’ lungs reached a maximum of 100 mGy. In addition, the damage observed to their internal organs was clear, and the levels of damage can exceed the damage caused by low-dose radiation exposure. To fully understand the total effects of radiation, Professor Hoshi said, it is necessary to examine beta rays and internal exposure as well as gamma rays and external exposure. “Although what we’ve found is just a small part of the whole, I feel that we’ve come to understand the importance of studying both of these aspects,” he said.

Behind Professor Hoshi’s focus on radioactive material with an extremely short half-life is the research pursued by his former colleague, Megu Otaki, a professor emeritus of biometrics at Hiroshima University. Based on epidemiological studies, Professor Otaki demonstrated that the fatality rate was high among those who came close to the hypocenter in the aftermath of the bombing and on the following day.

Professor Hoshi said, “There are various kinds of damage that can’t be explained by direct radiation only.” Even 71 years after the atomic bombing, there are still a host of unanswered questions related to the effects of radiation exposure on the health of A-bomb survivors. The effort to solve these questions can be said to be challenges against certain strands of “common knowledge” that science has accumulated. For Professor Hoshi, however, these experiments are the culmination of his career as a researcher. The work required to solve the mysteries of low-dose radiation is only half-finished.