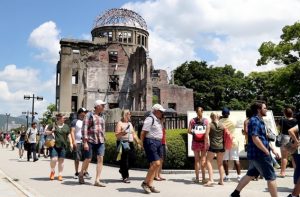 On August 6, the City of Hiroshima held the annual Peace Memorial Ceremony in the Peace Memorial Park, marking the 73rd anniversary of the atomic bombing by the United States. From dawn, the city was filled with prayers for the repose of the victims’ souls and for a peaceful future. In July of last year, the Treaty on the Prohibition of Nuclear Weapons, which completely bans the possession and the use of nuclear weapons, was adopted at the United Nations. It was the second observance of the A-bomb anniversary since then. However, it is estimated that there are some 14,450 nuclear weapons still existing on earth. The nuclear-armed nations and the countries that rely on a nuclear umbrella for their security, including Japan, which is the only nation to have suffered nuclear attack, are opposed to the treaty and have hindered it from entering into effect.

Among those in attendance at the ceremony were Prime Minister Shinzo Abe and government officials and representatives from countries in Europe, Asia, Africa, and other parts of the world. Some nuclear powers, such as the United Kingdom and France, also sent a delegate to the ceremony. To start the ceremony, the register of the A-bomb victims, to which the names of people who died or were confirmed dead during the past year have been added, was placed in the stone chest beneath the Cenotaph for the A-bomb Victims. At 8:15 a.m., the time the atomic bomb exploded above the city, the Peace Bell was tolled by two relatives of the A-bomb victims, and all in attendance solemnly offered a silent prayer.

Hiroshima Mayor Kazumi Matsui then read out the Peace Declaration. Referring to the International Campaign to Abolish Nuclear Weapons (ICAN), the non-governmental organization that won the Nobel Peace Prize last year for its contribution to the formation of the Treaty on the Prohibition of Nuclear Weapons, the mayor stressed that “the spirit of hibakusha is spreading through the world.” He explicitly criticized the theory of nuclear deterrence and nuclear umbrellas, saying that they “flaunt the destructive power of nuclear weapons and seek to maintain international order by generating fear in rival countries,” and “this approach...is inherently unstable and extremely dangerous.” At the same time, Mr. Matsui avoided pressing the Japanese government to sign the nuclear weapons ban treaty in his declaration. Two elementary school students, representing local elementary schools, read out the “Commitment to Peace” with conviction.

On August 6, 1945, a uranium-type bomb was dropped on Hiroshima for the first time in human history as a weapon of war. Three days later, a plutonium-type bomb was dropped on Nagasaki. In Hiroshima, the temperature of the ground at the hypocenter reached 3,000 to 4,000 degrees Celsius. Nearly everything within two kilometers of the hypocenter was burned to ash. The tremendous heat rays and blast, as well as the massive amount of radiation released by the bomb, instantly stole away the precious lives of many people. Babies and children were killed without mercy. Approximately 6,000 students from junior high schools and girls’ high schools, who had been mobilized to help tear down homes in the downtown area to create firebreaks in the event of air raids, also lost their lives.

It is estimated that, by the end of 1945, the death toll stood at 140,000 (±10,000) in Hiroshima and 73,884 in Nagasaki. In addition, many of those who survived through the ravages of the atomic bombings continued to suffer from the aftereffects of being exposed to a large amount of radiation.

The Ministry of Health, Labour and Welfare of Japan recognizes the following people as atomic bomb survivors: those who were in and around the cities of Hiroshima and Nagasaki at the time of the atomic bombing, those who entered the area within roughly two kilometers of the hypocenter within two weeks of the bombings, and those who were involved in rescue work. As of the end of March 2018, the number of A-bomb survivors still alive is 154,859, a decrease of 9,762 from the previous year, and their average age is now 82.06. Now that many of the A-bomb survivors are over 80 years old, how to hand down the A-bomb experiences to future generations is a pressing issue.

Last December, at the award ceremony for the Nobel Peace Prize, Setsuko Thurlow, 86, an A-bomb survivor who lives in Canada, delivered a speech on behalf of ICAN. She declared that nuclear weapons are “the ultimate evil” and appealed to the world by saying, “Let this be the beginning of the end of nuclear weapons.” Now is the time we make steady progress toward a peaceful world without nuclear arms.