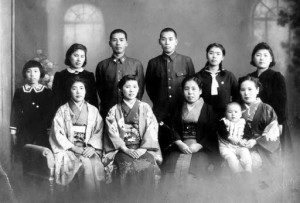 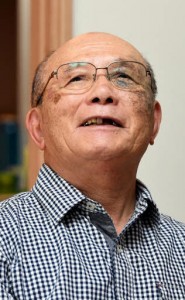 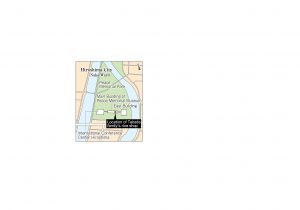 Family with rice shop perishes in the atomic bombing

Some A-bombed remains of the former Nakajima district were unearthed when the City of Hiroshima conducted excavation work which ended in March 2017. The city government is now developing a plan to exhibit the remains in another part of the Peace Memorial Park in an effort to hand down the devastating consequences of the atomic bombing. What should be done with the remains of the atomic bombing and what should be conveyed to future generations? This must be addressed through the memories of former residents of the district and the efforts to hand down these memories.

The Main Building of the Peace Memorial Museum is now being renovated and will reopen next spring. Right beneath the Main Building was once a rice shop, which also served as an abacus school. Akiko Nishihara (nee Takeda), who died in 2011 at the age of 93, had grown up there. Her family ran the rice shop in the former Zaimoku-cho district. The entrance to the shop was found during the excavation work. Her son Michihiro Nishihara, 77, lives in Saeki Ward. Taking out some photos from his family’s Buddhist altar, Mr. Nishihara said, “This uncle and this aunt, too, were killed in the atomic bombing.” His grandmother, Kikuyo Takeda, had nine children. At that time, Kikuyo and her six children between the ages of 30 and 14 lived at the rice shop. “What a tragedy. It was unbearable,” Mr. Nishihara said as he began to speak slowly and haltingly about what he remembers about the seven relatives who were “wiped out.”

The rice shop was at “97 Zaimoku-cho.” After her husband died in his thirties, Mr. Nishihara’s grandmother and her children ran the shop. As the war hurt their business, her eldest son Kiyoshi started teaching the abacus at the shop to contribute to the family income. Many children from the neighborhood came to take abacus lessons from him. Mr. Nishihara’s mother was the eldest daughter. As they lived near his grandmother’s house, Mr. Nishihara and his mother visited the rice shop almost every day.

Many memories of that time

“I was the first grandchild for my grandmother, so everyone in the Takeda family treated me with affection, as if I were their own child,” said Mr. Nishihara. Kiyoshi, especially, treated him as if he were his own son. When Kiyoshi made a plan to carry Mr. Nishihara in a rucksack and go to Miyajima Island, his grandmother became furious. Mr. Nishihara still remembers all these episodes his mother told him about.

“Kiyoshi liked children. He had a girlfriend, but he put off marrying her because he had to support the family,” Mr. Nishihara’s mother told him one day. Mr. Nishihara felt he understood why his uncle treated him so kindly.

Hoping personal items would be found

Friends of the Takada family used to pay their respects at the family’s gravesite every summer. But Mr. Nishihara has not seen them recently. Concerned that the family could be forgotten, he visited the stone monument standing in the Peace Memorial Park that signifies the site of the Zaimoku-cho district for the first time five years ago.

The excavation work made him restless. The pavement discovered in front of the Takedas’ family house is where the charred body of Kiyoshi lay. Mr. Nishihara was hoping that they would find an abacus so he could see indisputable proof that Kiyoshi had lived there. He wants people to know that this is where the family lived. But not a single abacus bead has been found.