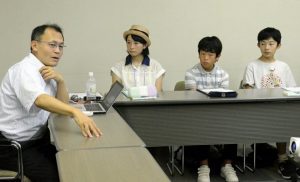 On August 4, Akira Kawasaki, 49, a member of the international steering committee of the International Campaign to Abolish Nuclear Weapons (ICAN), spoke with young people at an event in Higashi Ward, Hiroshima. ICAN, a non-governmental organization (NGO), was awarded last year’s Nobel Peace Prize for its efforts to help establish the Treaty on the Prohibition of Nuclear Weapons. The event was attended by 16 students from elementary schools to universities. Mr. Kawasaki encouraged them to increase their numbers and band together to appeal for the abolition of nuclear arms.

Mr. Kawasaki explained to the students that there are currently more than 14,000 nuclear warheads around the world, and said forcefully, “Nuclear weapons are inhumane and unacceptable weapons of mass destruction. They were first used on civilians in 1945. We must eliminate all of them by 2045, 100 years after they were first used.”

The participants voiced a number of questions and comments, to which Mr. Kawasaki responded. Examples included “What can we do to help eliminate nuclear weapons?” and “Many people think that peace can be maintained because of the strained relationships among the nuclear weapon states.”

About the idea of nuclear deterrence, Mr. Kawasaki pointed out, “The biggest challenge for the abolition of nuclear weapons is that many people, both in and out of Japan, believe that peace can be maintained with the existence of nuclear arms.” He went on to say that in order to transform this mindset, everyone needs to envision the consequences of a nuclear war in detail and help spread the voices of the A-bomb survivors throughout the world. He then encouraged the students to listen to the experiences of the survivors and become the kind of people who can appeal for the elimination of nuclear weapons with confidence and conviction.

Yuta Takahashi, 17, is a third-year student at Eishin High School in the city of Fukuyama and is involved in a signature drive for nuclear abolition as part of his school club activity. He said, “People around me often say that eliminating nuclear weapons can never be achieved. But I felt encouraged by Mr. Kawasaki’s words.”