Traces of father’s life are donated to Peace Memorial Museum 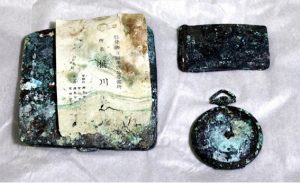 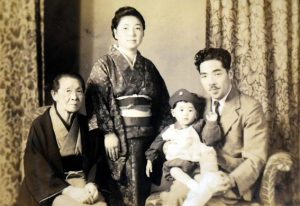 Prior to the A-bomb anniversary on August 6, Yoshiko Doi, 76, an A-bomb survivor who lives in Minami Ward, donated three items that once belonged to her father, Harukichi Hashikawa, and his will to the Hiroshima Peace Memorial Museum in Naka Ward. On August 6, 1945, Mr. Hashikawa, then 36, left home for work in the city center and never returned. These items were once entombed with the ashes of Ms. Doi’s mother, Ume, when she died 47 years ago, but removed from the grave and donated to the museum by Ms. Doi, who hopes that “future generations will know the reality of her father’s life in this world.”

The items are a pocket watch, a belt buckle, and a cigarette case that contains Mr. Hashimoto’s business card. His will, dated August 24, 1944, was kept in Ms. Doi’s home after she inherited it from her mother. Mr. Hashikawa apparently wrote the will in case something happened to him during the war.

On the morning of the A-bomb attack, Mr. Hashikawa, who was the office manager in Ujina for a Hiroshima prefectural trucking business, was going to the head office in Tatemachi (now part of Naka Ward) from his home in Ujinamachi (now part of Minami Ward). The head office was located about 600 meters from the hypocenter. Ume went out in search of her husband three days after the bombing, but she could only find a few of his belongings at the head office. She has never seen his remains.

After the war ended, Ume carefully kept these items and her husband’s will in the family’s Buddhist altar. She occasionally tried to encourage Ms. Doi by saying, “I still think your father will come home.” She wept, however, on the August 6 anniversary.

Both Ume, who was at home, and Ms. Doi, who was near their home, experienced the atomic bombing. In his will, Mr. Hashikawa asked Ume to “do everything you can to bring up Yoshiko.”

Ms. Doi placed her father’s belongings in the grave with her mother’s ashes because her mother had treasured them while she was alive. In recent years, Ms. Doi grew worried about the items deteriorating and so she removed them and donated them to the museum while moving the ashes of her mother to a temple near her house.

Her father’s pocket watch is now covered with rust. Ms. Doi remembers how the watch pointed to 8:15, the time the atomic bomb exploded, when she placed it in the grave. The Hiroshima Peace Memorial Museum plans to display the watch in its New Collection Exhibition at some point in the future. Ms. Doi hopes that it will help people understand that the atomic bomb deprived her family of the precious time they could have been together.