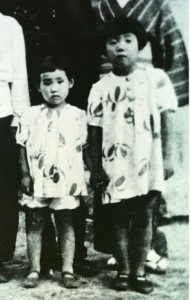 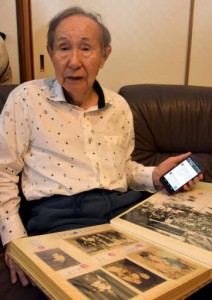 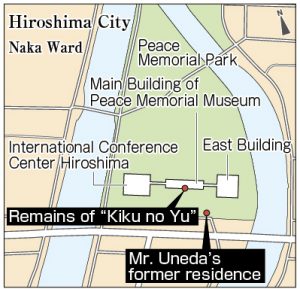 In the fall of 2016, parts of a tiled bathroom were unearthed among other A-bombed artifacts beneath the Main Building of the Hiroshima Peace Memorial Museum in Naka Ward. These are the remains of “Kiku no Yu,” a public bath that was located in the former Zaimoku-cho area, and were found below the exit stairway of the museum’s Main Building.

Eiichi Uneda, 89, who now lives in the city of Toyonaka in Osaka Prefecture, posts his memories of Kiku no Yu on Twitter. Mr. Uneda’s family ran a sake shop in Zaimoku-cho, where he grew up, and was a regular customer of Kiku no Yu. He began posting his tweets at the end of last year under the name “Ei-chan,” the nickname he has been called since he was a child.

Went to Kiku no Yu every day

Mr. Uneda has tweeted, “Kiku no Yu was a public bath in Zaimoku-cho. I went there every day” (June 29) and “I hated to go to Kiku no Yu with my father because he made me soak in a hot bath until I counted to 100. My body turned bright red and my heart pounded painfully” (July 14).

A citizens’ group in Hiroshima that collects memories of the lost community from former residents encouraged Mr. Uneda to use Twitter. “I’m happy when I see that people in Hiroshima have ‘liked’ my tweet,” Mr. Uneda said. He searches his memory of the once-bustling area and tweets out his recollections: a food stand called Issen Yoshoku (One-Penny Western Food), in front of Seiganji Temple near his house; a picture-story show that came to entertain area residents. He tweets not just to reminisce about his hometown, which was annihilated by the atomic bomb. His Twitter profile page states: “preparatory course student for the Imperial Japanese Navy” and “war orphan.” Mr. Uneda said, “When I read the thoughts of younger people on the Internet, I became concerned because they don’t know what the war was like.” Thus, he feels a strong desire to share his experience and tell others about the reality of war.

When Mr. Uneda was a student at Hiroshima Municipal No. 1 Industrial School (now Hiroshima Prefectural Industrial School in Minami Ward), he sought to join a preparatory course for the Japanese Imperial Navy. In July 1944, he enlisted and left his home in Zaimoku-cho. He took a test to join the Navy without consulting his parents because he felt fully prepared to die fighting in the war. The following year he was assigned to the Fukuyama Naval Air Group.

Mother in tears, seeing him off

In April 1945, Mr. Uneda’s parents came to see him in Fukuyama. He told them how he was doing and saw them off at the station. When the train started moving and Mr. Uneda saluted his parents, his mother Masako, who was on the platform, broke down in tears. “My mother didn’t say anything to stop me from joining the Navy, but I think her tears told me everything that was in her mind.” Remembering that time, Mr. Uneda’s eyes quickly turned red.

That was the last time Mr. Uneda saw his parents. After the war, he returned to his decimated hometown. His father Zenshiro, then 50, lost his life in the atomic bombing at his workplace near their home. The remains of Masako, then 42, and his younger sisters Keiko and Motoko, then seven and five, were never found. He moved to Hyogo Prefecture, relying on his uncle for support, and began working in the Kansai region.

He tweeted on March 11: “Boyhood heroism made me leave my hometown, which was devastated and turned into hell for my family.” And on May 3, Constitution Memorial Day, he posted this message: “I was standing alone at the site of my home under the hypocenter. Everything around me was wrapped in silence. Was I Urashima Taro? I had gotten the gift of the Peace Constitution from the Princess of the Dragon’s Palace. I want to cherish it.” (Note: Urashima Taro is a character from an old Japanese folk tale. Urashima Taro spent several years at the Dragon’s Palace under the sea after he saved a turtle. When he returned to his hometown with a box given to him by the princess, he discovered that hundreds of years had already passed and everything had changed completely.)

The atomic bomb and the war stole away his hometown and so many of the lives there. Mr. Uneda believes it’s important to display the remains now, at a time when many people are unfamiliar with war, in order to show the traces of those daily lives. The former resident continues to tweet about his memories.