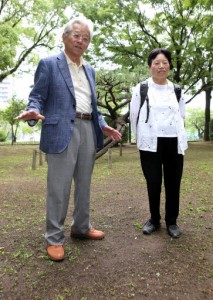 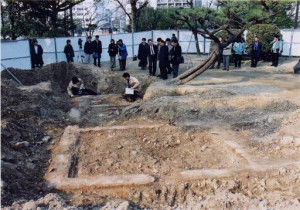 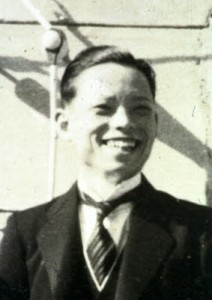 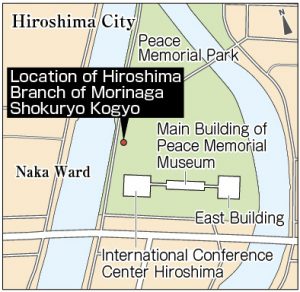 Hoping remains of father’s workplace will be displayed

Standing on the north side of the International Conference Center Hiroshima, located in the Peace Memorial Park, Takaaki Ampuku, 80, said, “Ah, was it here? His crushed bones might still be here.” With deep emotion, he gazed at the ground beneath his feet, where the foundation of the Hiroshima branch building of Morinaga Shokuryo Kogyo (Morinaga Food Industry, now Morinaga & Company, Ltd.) is buried. His father Akito, who was then 37, worked here and was killed in the atomic bombing.

The remains of the foundation were discovered in 2000 when some trees were transplanted from the construction site of the National Peace Memorial Hall for the Atomic Bomb Victims. But the city refilled the area because of safety concerns and to prevent further deterioration of the remains. Former residents of the Motoyanagi-cho district, where the building was located, asked that the city exhibit the remains, but their request was not met. At this point, there is no sign of the fact that the remains were discovered there. Mr. Ampuku did not know the exact location of the building until he visited the area at the request of the Chugoku Shimbun.

Mr. Ampuku and his sister, Kazuko Ogawa, 82, visited the site. “He was a sweet father. He once took me to the branch office,” said Ms. Ogawa. Mr. Ampuku nodded in agreement.

Mr. Ampuku’s family, which was composed of his parents and four children, lived in the Kanon district of today’s Nishi Ward until 1944. His father was the head of the general affairs and accounting section of the branch. He often brought back candy for his children from his workplace.

In 1944, the family, except the father, moved to the village of Ogauchi (part of today’s Asakita Ward), a safer location. His last memory of his father was when he came to visit them in Ogauchi and the family went to view flowering cherry blossoms in April 1945. He told Mr. Ampuku, “You are my pride and joy.” Mr. Ampuku was a first-grader at Ogauchi National School and his father was so glad to see him growing up.

Four months later, his mother Tomoe went into Hiroshima to search for his father. His remains were found where the branch office was located. His colleagues were able to identify him because with the bones was a key to a safe that Mr. Ampuku always carried. “When my mother came back to the village, she was in a state of shock and could barely breathe,” said Ms. Ogawa.

Without returning to Hiroshima, Tomoe worked and raised her four children in Ogauchi after the war. She suffered health problems, though, and died in 1955 at the age of 42. Her death may have had something to do with the fact that she provided aid to the wounded at Ogauchi National School in the aftermath of the bombing.

The animated film titled “In This Corner of the World” was released in 2016. The film shows what the Hiroshima branch building was like before the atomic bombing. Mr. Ampuku saw the film with his grandchild and made a gasp when he saw the building’s modern look. For the first time he told his grandchild that his father died in the atomic bombing and how sad his mother and the rest of the family were. If the foundation of the building was exhibited, it would move the hearts of younger generations, he thought.

The City of Hiroshima is now developing a plan to exhibit the remains of the former Nakajima district, which lie buried beneath the Peace Memorial Park. Candidate sites will be selected from various spots in the park, including the location where the branch office once stood.

Twenty-two employees of the branch office were killed at this building on August 6, 1945. The victims that day were not only residents of the area but also people who came into the district for work, and their surviving family members were forced to live with the anguish of their loss. Mr. Ampuku fervently hopes that the remains of the branch office building will be displayed in order to convey this reality to people alive today.