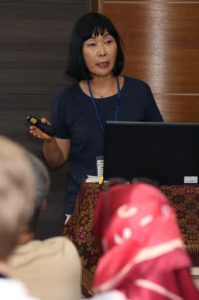 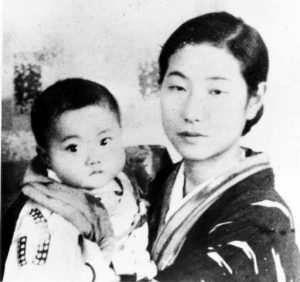 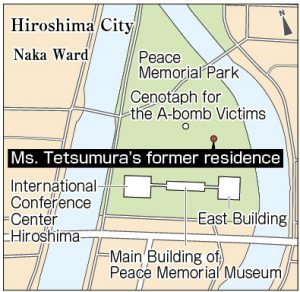 Sharing her mother’s memories in English

“My mother used to live in Tenjin-machi, which was around where the East Building of Hiroshima Peace Memorial Museum now stands.” When Kumiko Seino, 60, a resident of Naka Ward, began speaking in English, visitors from abroad, including the United States and India, showed a look of surprise. Ms. Seino was relating the A-bomb account of her mother, Kyoko Tetsumura, 88, also of Naka Ward, in the East Building of the Hiroshima Peace Memorial Museum. Ms. Seino is one of the “memory keepers” who are inheriting the A-bomb survivors’ experiences and conveying their accounts on their behalf. The museum offers such talks on the A-bomb experiences to international visitors on a regular basis.

On the morning of August 6, 1945, the day of the atomic bombing, Ms. Tetsumura went to work at a facility of the former Hiroshima Army Provision Depot in Asaminami Ward. She returned home the following day and started searching for her mother, Tsuneko Shikano, then 41, and her brothers Shigeru and Masaru, then eight and two, around their ruined house.

“My mother couldn’t find the remains of her family members, so she never held a funeral for them,” Ms. Seino said. After hearing this A-bomb account, Chandler Holden, visiting Hiroshima from the United States, said in a trembling voice that she had had no idea that the Peace Memorial Park, which is now a famous tourist destination, was once a bustling part of the city and that so many people had perished in the atomic bombing.

Ms. Seino became a “memory keeper” in fiscal 2015, thinking that the time had come to take over her mother’s memories and hand down her experience to others. Ms. Seino learned about her mother’s experience by listening to her talk about it from time to time. She also watched as her mother drew pictures of her horrific recollections and learned that pictures of the atomic bombing made by the survivors were being collected. Recently, Ms. Seino’s mother unexpectedly thanked her for “considering her feelings,” which made her happy.

Another person who inspired Ms. Seino to become a “memory keeper” was Keijiro Matsushima. Mr. Matsushima, who died in 2014 at the age of 84, was an A-bomb survivor and a lecturer for the “memory keepers” program. He was an English teacher at Ms. Seino’s junior high school and she saw him regularly at the hospital where she worked as a nurse when he was being treated for cancer.

Along with the three-year training to become a “memory keeper,” Ms. Seino went to an English conversation school to improve her English ability. She then started giving talks in English for Mr. Matsushima, who continued to share his A-bomb account with visitors from abroad in spite of his illness, so that she could carry on with his wishes and help hand down his experience.

Everyday lives of people before the atomic bombing

The number of international visitors to the Hiroshima Peace Memorial Museum, which was built in the former Nakajima district after it was annihilated by the atomic bombing, reached a record high of roughly 390,000 last fiscal year. Barack Obama, then president of the United States, the nuclear superpower that dropped the atomic bombs on Hiroshima and Nagasaki, referred to the residents’ daily lives before the bombing in the speech he gave during his visit to Hiroshima two years ago. Ms. Seino said she feels the need to tell people around the world about what the former Nakajima district was like prior to the atomic bombing and how the area was transformed after the attack.

“My mother’s father sold popsicles next to the movie theater during the summer.” “Inside the temple grounds was a children’s playground.” Ms. Seino shows pictures of the remains that have been unearthed beneath the Main Building of the museum, while sharing stories of her mother and Mr. Matsushima. The site around the entrance of the rice shop, where there was an abacus school that Ms. Seino’s mother used to go to when she was a child, was also excavated. “You take one look at the remains and know that the park was constructed on top of the town that was wiped out by the atomic bomb,” she continued.

Ms. Seino always closes her talks with the following message: “Please remember. Nuclear weapons not only destroy people’s lives, they also destroy the precious places where people live. I would like you to do what you can so that the people of Hiroshima and Nagasaki are the last-ever victims of nuclear weapons.”