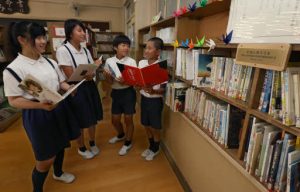 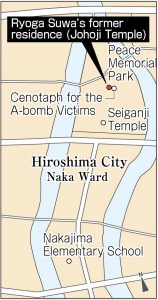 Children learn about the A-bomb tragedy

The city district where Nakajima Elementary School is located includes Nakajima-cho, site of today’s Hiroshima Peace Memorial Park. The school will hold a peace gathering on the morning of August 6, during which a sixth grader named Tenka Aki, 11, will read out an essay she wrote based on the experience of Ryoga Suwa, 85, who was a sixth grader at Nakajima National School 73 years ago. “In the place I have evacuated to,” Mr. Suwa is quoted as saying, “I’m waiting with tears in my eyes for my parents to come and take me home.”

Mr. Suwa lived at Johoji Temple, which was located at 69 Nakajima Honmachi. This was to the west of where the Cenotaph for the A-bomb Victims now stands. His father Reikai, then 57, was the priest of the temple. Reikai, his mother Kuni, then 56, and his 16-year-old sister Reiko perished in the atomic bombing. Prior to the A-bomb attack, Mr. Suwa had been evacuated with other children to present-day Miyoshi in the northern part of the prefecture in case of air raids on the city.

In April, about 60 sixth graders of Nakajima Elementary School listened to Mr. Suwa’s experience as part of their peace studies program. Kazunori Seki, 57, the principal of the school, asked Mr. Suwa to share his experience with the students so they can put themselves in his place and understand how he felt when he lost the members of his family. This talk was realized after a group of former students of the school donated 1,000 books on the atomic bombing and war to the school in February. Mr. Suwa was the head of this group of former evacuated students.

The group enabled the former students, who had lost family members, to renew their old friendships. But as the participants grow older, it has become difficult to sustain the group’s activities. To help hand down their memories of the atomic bombing, they purchased the books and donated them to the school. Tenka recalls how Mr. Suwa visited the school despite poor health and told the students that “We must hand down the reality of this tragedy.”

Children deprived of a future

Some students of Nakajima National School were killed in the atomic bombing. Most of the victims were first and second graders, who were not required to evacuate. Students who lived in the former Nakajima district attended classes at Seiganji Temple, which was used as a place for temporary classrooms. The temple once stood where the Main Building of the Peace Memorial Museum is now located.

“Children were deprived of their future shortly after their lives began. I went to the same elementary school so I have to tell people about their resentment,” said Toshiko Tanaka, 79, an A-bomb survivor. She went to Mutoku Kindergarten at Seiganji Temple, and most of the children there went to Nakajima National School. During the summer when she was a first grader, Ms. Tanaka moved to Ushita National School (now Ushita Elementary School in Higashi Ward). She experienced the atomic bombing at a spot 2.3 kilometers from the hypocenter and suffered burns to her head and arms. Some of her classmates at Nakajima were killed but their remains were not found.

Ms. Tanaka began sharing her experience of the atomic bombing in Japan and abroad when she was almost 70. In June of last year, she traveled to New York to relate her A-bomb account at a gathering that took place at the United Nations headquarters. She talked about her experience and her classmates’ deaths and appealed for support for the adoption of the Treaty on the Prohibition of Nuclear Weapons.

Part of the grounds of Seiganji Temple were unearthed during an excavation conducted beneath the Main Building of the Peace Memorial Museum. It is believed that other remains, such as the gourd-shaped pond where Ms. Tanaka played before the atomic bombing, still lie buried.

Many people walk through the Peace Memorial Park without realizing that a former community is buried beneath their feet. Embedded in the ground are more sorrow and chagrin than can be told. “It is the duty of the living to ban and eliminate nuclear weapons,” said Ms. Tanaka. “When I stand in the park, I feel that I can hear the voices from underground saying so.”

This article concludes the “A-bombed remains buried beneath Peace Memorial Park” series, which was written by Kyosuke Mizukawa.