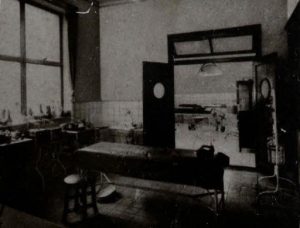 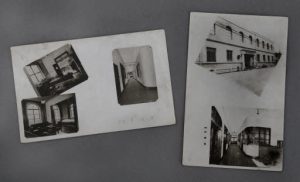 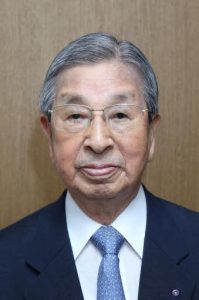 On August 6, 1945, the atomic bomb exploded about 600 meters right above Shima Hospital in Saiku-machi (now part of Naka Ward). It has been learned that images which show the inside and outside of the hospital building have been preserved. The photos were taken before the war and were used for picture postcards to celebrate the opening of the hospital. The postcards were found among the belongings left behind by the hospital director from that time. There are few images that show the original appearance of the hospital before it was completely destroyed by the atomic bomb.

The postcards are believed to have been made by the late Kaoru Shima, the hospital director at the time, to celebrate the opening of the hospital in August 1933. Mr. Shima died at the age of 79 in 1977. There are two different postcards, each 14.5 centimeters long and 9 centimeters wide. In all, five images of the hospital are printed on them.

As the photos show, the hospital had a western-style appearance, symbolized by columns and arched windows. The examining room and operating room were equipped with a variety of medical instruments. The building also had a special room that was rather luxurious. On the reverse side of the postcard is printed text that includes such phrases as “Saiku-machi, Hiroshima”; “Shima Hospital, surgery”; or “Patient’s room number.” Apparently, the postcards were intended for hospitalized patients to send to others outside the hospital.

Naoko Shima, 75, is the wife of Kazuhide Shima, 83, Kaoru’s eldest son and the honorary hospital director. She happened to find the postcards several years ago when she was going through Kaoru’s things at their home, which is located within the premises of the hospital.

At the time of the atomic bombing, the hospital was a two-story brick building with about 50 rooms for patients. As there were few surgical clinics in the city center prior to the bombing, it is said that the hospital was visited by many patients on a daily basis. Looking at the photos, Shinobu Kikuraku, 60, a curator at the Hiroshima Peace Memorial Museum, said, “Dr. Kaoru Shima had studied in Germany, and equipped his hospital with the most advanced medical equipment. The hospital also had western-style rooms, a unique feature for that time. These photos are very valuable for clearly confirming these facts.”

As a result of the atomic bombing, the hospital building collapsed, except for the entrance area, and about 75 people, including nurses and patients, were killed there. Kaoru, the hospital director, was able to escape harm because he had left Hiroshima the day before to perform an operation in Kozan-cho (now part of Sera-cho, Hiroshima Prefecture). He returned to Hiroshima in the evening of August 6 and became actively involved in rescue activities. In his memoir, he described the appearance of the building in the wake of the bombing with these words: “We found numerous remains of the dead among the broken bricks.”

Kazuhide has now handed over the hospital to Hideyuki, 47, his eldest son. He said, “No other photos have been kept that show the inside of the initial hospital during the pre-war period. We plan to take good care of them and hand them down to our descendants.” He will also provide these images to the Peace Memorial Museum.