Paper lanterns drift on Hiroshima river with prayers for peace 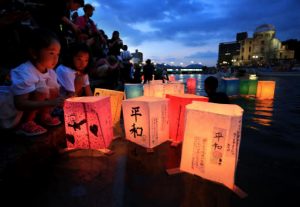 On the evening of August 6, paper lanterns were floated on the Motoyasu River, which flows in front of the A-bomb Dome in Naka Ward, Hiroshima. The soft glow of about 8,000 paper lanterns, offered to comfort the souls of the A-bomb victims and pray for peace, slowly drifted along the river and reflected on the surface of the water.

The event began at 6 p.m. Family members of the victims, parents with children, and other participants wrote messages on the lanterns, such as “I wish the world was free of nuclear weapons” or “Wishing for peace, I will continue to convey the A-bomb experience to younger generations,” then set their lanterns afloat on the river. The lights of the lanterns, carrying the wishes of the participants, formed clusters of color as they drifted along.

Hiromu Sato, 65, a resident of Saeki Ward who came to remember his uncle, who was killed in the atomic bombing, wrote a message on his lantern that said, “May we not make war again.” He was with his granddaughter Nana, 7, a second-grade elementary school student who was visiting her grandfather from Tochigi Prefecture during her summer vacation. They set the lantern afloat together. Mr. Sato said, “It’s hard to communicate the importance of peace to my granddaughter, because she doesn’t know about the war. I hope she’ll remember the experience she had today.”