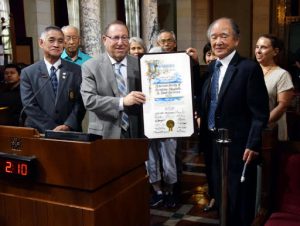 The Los Angeles City Council has awarded a certificate of appreciation to the American Society of Hiroshima-Nagasaki A-bomb Survivors (ASA). ASA has been active for many years, mainly in the Los Angeles area, sharing their accounts of the atomic bombings in order to inform the public about the catastrophic consequences of the use of nuclear weapons. ASA expressed delight with the recognition, saying that this award was a first for the group. (by Yumi Kanazaki, Staff Writer)

The award ceremony was held on August 8, a date that lies between the dates of the atomic bombings of Hiroshima and Nagasaki. Eight people, including A-bomb survivors and supporters, attended the ceremony, where Junji Sarashina, 89, the president of the group, received the certificate from Paul Koretz, a council member of the Democratic Party. Afterward, at the conference hall, a resolution urging the U.S. government to support the policy of “no first use” of nuclear weapons and the Treaty on the Prohibition of Nuclear Weapons was adopted unanimously, with Mr. Sarashina making a speech to appeal for the council’s approval. Among major U.S. cities, the adoption of the resolution in Los Angeles is the second, following the adoption of a similar resolution in Baltimore.

Los Angeles is the second most populous city in the United States after New York. The United States is the only nation in the world to have used nuclear weapons. Through this award, the Los Angeles City Council has shone a spotlight on the important work of the A-bomb survivors in the Los Angeles area who have persisted in sharing their A-bomb experiences. When Hiroshima was attacked with the atomic bomb, Mr. Sarashina was a student at First Hiroshima Prefectural Junior High School (now Kokutaiji High School). He says that although he knows the members of his group do not wield wide influence, he would be very happy if their efforts have led to some U.S. citizens coming to the realization that what happened in Hiroshima and Nagasaki could also occur to them.

ASA, including former president Kazu Sueishi, who died last year, has also actively supported the provision of health check-ups for A-bomb survivors living in North America, conducted by doctors dispatched by the Hiroshima Prefectural Medical Association. The group has also sustained its efforts to convey the A-bomb experiences of Hiroshima and Nagasaki to students and young people.

The Physicians for Social Responsibility (PSR), a partner organization of the International Campaign to Abolish Nuclear Weapons (ICAN), a non-governmental organization, initiated the idea of awarding the certificate. PSR is now urging local governments throughout the United States to adopt a resolution that supports the nuclear weapons ban treaty. When the Los Angeles branch of PSR, led by Dr. Jimmy Hara, brought up the aim of adopting the resolution to Mr. Koretz, he suggested that the City of Los Angeles award the certificate of appreciation to the A-bomb survivors to recognize the contributions that hibakusha have made in sharing their A-bomb experiences, which helped lead to the eventual establishment of the treaty.