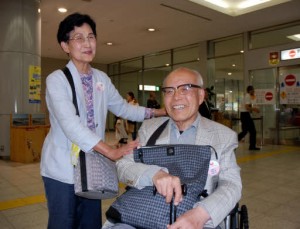 Shigeaki Mori, 81, an A-bomb survivor and resident of Nishi Ward, has long pursued an investigation into the 12 American prisoners of war (POWs) who lost their lives as a result of the A-bomb attack on Hiroshima. He arrived back in Hiroshima on June 4 after traveling to the United States for the first time.

Mr. Mori made the two-week trip with his wife Kayoko, 75, and he returned to Hiroshima looking well. Describing his experience, he said with a smile, “I feel overwhelmed by the fact that my long-held desire to comfort the souls of the American A-bomb victims in their homeland has been realized. I’d like to express my sincere gratitude to all the people I met in the United States.”

During his trip, he visited Boston and San Francisco and took part in screenings of the documentary film “Paper Lanterns,” which featured his longtime investigation into the deaths of the American soldiers in Hiroshima. He also paid a visit to the United Nations headquarters in New York, where he delivered a speech.

When he visited Lowell, Massachusetts, the hometown of Normand Brissette, a crew member who was on board a downed U.S. Navy bomber and later died in the atomic bombing, Mr. Mori attended a memorial service and spoke with family members of Mr. Brissette.

Barry Frechette, 47, the film director who made “Paper Lanterns,” worked with others on a crowdfunding campaign to raise money for the trip which brought Mr. Mori and his wife to the United States.