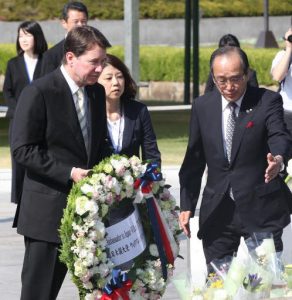 On August 7, William Hagerty, the U.S. ambassador to Japan, visited the Hiroshima Peace Memorial Park and laid flowers at the Cenotaph for the A-bomb Victims. He also met with Hiroshima Mayor Kazumi Matsui and said that he appreciates the efforts being made to educate younger generations so that a similar tragedy is never repeated.

Mr. Hagerty paid a visit to the cenotaph with his wife and four children. After offering a wreath of flowers, he bowed deeply and prayed for the victims of the bombing. Prior to offering the flowers, he met with the mayor at the International Conference Center Hiroshima. Mr. Hagerty said in his remarks that he had come to the city as part of his commitment to help create a more peaceful world and he hopes that children will learn about the consequences of war.

Except for the start of their meeting, Mr. Hagerty met with Mr. Matsui behind closed doors. After the meeting, the mayor spoke to the media and explained that Mr. Hagerty had said that a world without nuclear weapons was a common desire but he made no mention of the Treaty on the Prohibition of Nuclear Weapons. With regard to a possible visit by U.S. President Donald Trump to Hiroshima, for which the city made a request last October, Mr. Hagerty said that he would speak to Mr. Trump about it.

Mr. Hagerty assumed his post as ambassador in mid-August of last year. His attendance at this year’s Peace Memorial Ceremony marked the first participation by a U.S. ambassador to Japan under the Trump administration.