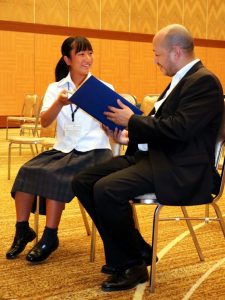 On August 5, an event was held in which junior high school students of Hiroshima handed messages of peace that they wrote in English to a number of ambassadors to Japan who were in Hiroshima to attend the Peace Memorial Ceremony on August 6. The event took place in Naka Ward with 15 second- and third-year junior high school students, who interacted with 21 people, including ambassadors from 16 nations.

The junior high school students talked to the ambassadors and shared their messages, which they had created during the past two months after hearing the thoughts of international visitors to the Peace Memorial Park. Kazutaka Miyamoto, 15, a third-year student at Shudo Junior High School and a resident of Nishi Ward, spoke to the ambassador from Ethiopia about how he could help convey the tragedy of war to others and said that cooperation among nations would lead to making a more peaceful world. Kanna Oda, 14, a third-year student at Yasunishi Junior High School and a resident of Asaminami Ward, told the ambassador from Australia that she could send messages of peace using familiar methods like social networking services as well as accessories that make use of paper cranes. Ms. Oda later said, “I was pleased that the ambassador was nodding as he listened to my message.”

The event was organized by the city’s board of education as a vehicle for having students think about what they can do to help build a more peaceful world and communicate their messages in English. It has been an ongoing event since 2015.