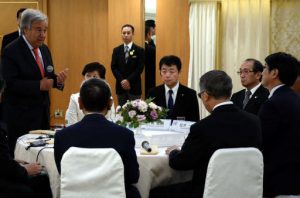 On August 8, Antonio Guterres, the Secretary-General of the United Nations, visited the City of Nagasaki and met with leaders of the prefectural and municipal governments of the A-bombed cities, including Hiroshima Mayor Kazumi Matsui and Nagasaki Mayor Tomihisa Taue. He also met with A-bomb survivors, listened to their views, and said that he shared their hope and determination to advance with them toward a world without nuclear weapons.

Mr. Guterres arrived in Nagasaki prior to attending the Peace Memorial Ceremony held in Nagasaki on August 9. Mr. Guterres was the first sitting U.N. Secretary-General to attend the peace ceremony in Nagasaki on August 9. Masanori Nagata, the chairperson of the Hiroshima City Council, and Nagasaki Governor Hodo Nakamura also attended the meeting. Mr. Guterres said that he wants to stand in solidarity with the citizens of the A-bombed cities and pay his respect to the resilience of those who took on the task of reconstructing the country and restoring its strength despite the tremendous damage left behind by the war.

Mr. Matsui explained the efforts of Mayors for Peace to Mr. Guterres and asked him to enhance U.N. ties with the organization. Mr. Taue asked Mr. Guterres to urge the leaders of all nations to visit the A-bombed cities. Mr. Guterres said that he appreciates the initiative of both cities and that the United Nations will offer them its full support.

Afterward, Mr. Guterres met with eight people, including the chairperson of each of five A-bomb survivors’ groups in Nagasaki and Emiko Inoue, 79, a resident of Aki Ward, Hiroshima, who attended the ceremony held on August 9 as the representative of A-bomb survivors living in Hiroshima. Mr. Guterres listened to their desire for peace and said that their accounts are important and can teach people so much. He encouraged them to continue conveying their accounts to people around the world.

After the ceremony, Ms. Inoue said she was happy that Mr. Guterres had pledged to work together with them to pursue a world without nuclear weapons. She added that she hopes he will take strong action to advance this cause.