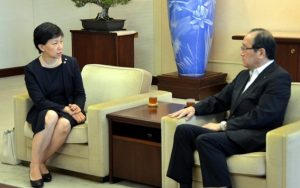 On August 5, Izumi Nakamitsu, the U.N. Under-Secretary-General and High Representative for Disarmament Affairs met with Hiroshima Mayor Kazumi Matsui at City Hall. Ms. Nakamitsu is visiting Hiroshima to attend the Peace Memorial Ceremony. Ms. Nakamitsu mentioned the significance of U.N. participation in the ceremony, saying, “I believe this is an important opportunity to reconfirm the U.N.’s engagement in nuclear disarmament efforts and convey our message to the world.”

Ms. Nakamitsu is taking part in the ceremony on behalf of Antonio Guterres, the U.N. Secretary-General. She stressed that nuclear disarmament is one of the top priorities for the United Nations and added, “The political will of U.N. member nations like the United States and Russia is necessary to advance the aim of nuclear disarmament.” She said it is important to work on initiatives that can help create dialogue among the member nations.

Mr. Matsui praised Mr. Guterres for the document he released in May, which is the first comprehensive summary made by the U.N. of the challenges involving nuclear disarmament that it must address. Voicing his appreciation, the mayor said, “This document is very encouraging for us because it describes the elimination of nuclear arms.”

After the meeting with Mr. Matsui, Ms. Nakamitsu responded to questions from the media and mentioned that the world’s nations are currently divided when it comes to their support of the nuclear weapons ban treaty. She then called on the Japanese government to play a concrete role in bridging this divide between the two sides, as it has declared it would, and take the initiative to help advance the realization of nuclear abolition.