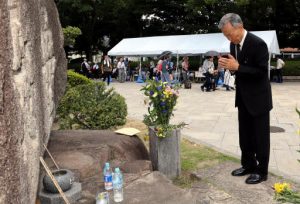 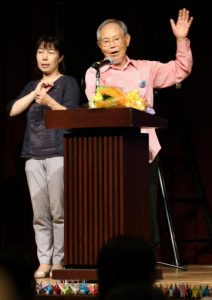 Hiroshima marked the 73rd anniversary of the atomic bombing against the backdrop of developments in the goal of denuclearizing the Korean Peninsula. Ethnic (zainichi) Korean A-bomb survivors living in Japan, along with their children and grandchildren, offered prayers for the repose of the souls of the A-bomb victims at the Peace Memorial Park in Naka Ward, Hiroshima, and reaffirmed their desire for the abolition of nuclear weapons.

“I hope that young people today will never experience the terrible suffering that I have experienced,” said Lee Heon Baek, 83, a resident of Nishi Ward, as he put his hands together in prayer in front of the Atomic Bomb Dome. He is the vice-chair of the Council of Atom-bombed Koreans in Hiroshima.

Mr. Lee experienced the atomic bombing while at his home in Eba-cho (part of present-day Naka Ward) at the age of 10. Fortunately, he escaped serious injury because his house was located behind a hill called Eba Sarayama that was 52 meters high. He said, “After the war ended, every day was a struggle just to survive.” He lost his father at the age of seven, and after that, his mother resorted to collecting iron scraps and doing whatever she could do to raise her five children.

Lee Jong Keun, 89, a second-generation South Korean living in Japan and a resident of Asaminami Ward, talked about his A-bomb experience at the Hiroshima YMCA Hall in downtown Hiroshima. Mr. Lee was exposed to the atomic bomb in Kojin-machi (now part of Minami Ward) on his way to work when he was 16 years old and suffered extensive burns to his face and neck. In front of an audience of about 180 people, he said with great sadness and regret that he was unable to help those who were trapped under toppled buildings.

Mr. Lee hopes that both U.S. and North Korean leaders will visit Hiroshima and understand the catastrophic disaster that was wrought by the atomic bombing. He said with strong conviction that, rather than playing political games, they should focus on denuclearization while keeping in mind the inhumane nature of nuclear weapons.

On August 6, young Koreans also reflected on peace. Kim Jiyeong, 17, a third-year high school student at the Hiroshima Korean School in Higashi Ward, offered flowers at the Cenotaph for the Atomic Bomb Victims and said that she would like to work with others who desire a peaceful world without discrimination.

“We will work together to end the nuclear age which started in Hiroshima,” said Lee Tae Jae, 59, the president of the second-generation South Korean A-bomb survivors’ group and a resident of Busan who is currently visiting Japan with some Korean high school students, offering a silent prayer at 8:15 a.m. in Minami Ward. He said that the Japanese government should make a much greater contribution to the unification of Korea, taking into account Japan’s history of colonial aggression.