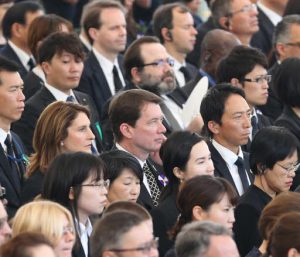 On August 6, the Peace Memorial Ceremony was held in the Peace Memorial Park in Naka Ward, Hiroshima, and attended by representatives from 85 countries and the European Union (EU). Those in attendance included representatives from the seven nuclear weapon states, including William Hagerty, the U.S. ambassador to Japan. However, the stances of the participating countries remain divided over the the Treaty on the Prohibition of Nuclear Weapons, which was adopted last year at the United Nations.

The attendance of Mr. Hagerty at the ceremony marks the first participation in the Peace Memorial Ceremony by a U.S. ambassador to Japan representing the Trump administration, which is now seeking to develop low-yield nuclear weapons. The ambassador was accompanied by his wife and their four children. Mr. Hagerty listened to Hiroshima Mayor Kazumi Matsui intently when he read out the Peace Declaration and strongly asserted, “Certain countries are blatantly proclaiming self-centered nationalism and modernizing their nuclear arsenals.”

With regard to the nuclear weapons ban treaty, David Ellis, the deputy head of the British Embassy in Tokyo, rejected it by saying that the United Kingdom will not support the treaty, though it desires a world without nuclear weapons. He expressed his concern that the treaty is an unrealistic mechanism for achieving the elimination of nuclear arms and risks diluting the effectiveness of the Treaty on the Non-proliferation of Nuclear Weapons (NPT). The United Kingdom is a nuclear-armed nation. On the other hand, Jamie Walsh, the deputy director for disarmament and non-proliferation at the Irish Department of Foreign Affairs and Trade, emphasized, “We definitely plan to ratify the treaty, 100%.” During his first visit to Hiroshima, he also reaffirmed his commitment to continue doing his utmost, as someone who has been involved in disarmament efforts for more than a decade, to advance the abolition of nuclear weapons.

In the wake of the summit meeting in June between the U.S. and North Korean leaders, the Australian ambassador to Japan, Richard Court, said he is hopeful that the current talks will lead to the complete, verifiable, and irreversible denuclearization of North Korea.

After the ceremony, U.S. Ambassador Hagerty left the venue without making a comment or responding to the media. He will meet with Mayor Matsui on the morning of August 7 and offer flowers at the Cenotaph for the A-bomb Victims.