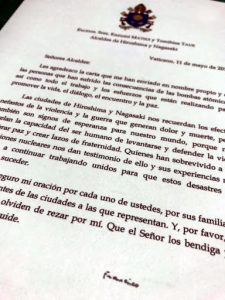 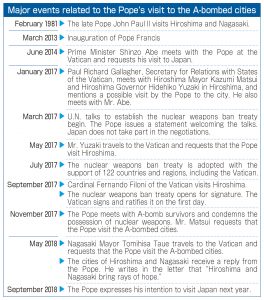 With Pope Francis expressing his intention to visit Japan next year, hopes are now high among the people of Hiroshima and Nagasaki and A-bomb survivors’ groups that the Pope may come to the A-bombed cities. The Vatican has already ratified the Treaty on the Prohibition of Nuclear Weapons, and his visit to the A-bombed cities could give a lift to the appeal for the nuclear weapon states and the Japanese government to ratify the treaty and help speed the abolition of nuclear arms. To realize the Pope’s visit, some say that a louder call from citizens is needed.

Hirotaka Matsushima, the head of Hiroshima City’s Peace Promotion Division, welcomed the news and the fact that it included possible timing for this visit. “This is great news,” he said. “I hope that the Pope will send out a message for peace from the A-bombed city.”

The City of Hiroshima and Hiroshima Prefecture began stepping up their efforts after H. E. Archbishop Paul Richard Gallagher, Secretary for Relations with States of the Vatican (which corresponds to the position of foreign minister), visited Hiroshima in January of last year. At the time Mr. Gallagher suggested that there was a possibility that the Pontiff might also visit the city. Both Hiroshima Governor Hidehiko Yuzaki and Hiroshima Mayor Kazumi Matsui went to the Vatican in May and in November of last year, respectively, and made this request of the Pope in person.

Their hopes are tied to the enormous influence that the Catholic Church has around the world, with 1.23 billion members. During his visit to Hiroshima in 1981, the late John Paul II read out the “Appeal for Peace” in nine languages, with 25,000 looking on, in front of the Cenotaph for the A-bomb Victims. His address generated a significant response.

The City of Hiroshima is also taking note of the Pope’s appeal. The Pontiff is from Argentina, a signatory to the Treaty for the Prohibition of Nuclear Weapons in Latin America and the Caribbean. When talks began at the United Nations to establish a global treaty to outlaw nuclear arms, the Pope issued a statement in support of the negotiations. And when the nuclear weapons ban treaty opened for signatures and ratifications on September 20 of last year, the Vatican responded on the first day.

The Pope rejects the idea of nuclear deterrence, which the nuclear nations and the countries under the nuclear umbrella cite as a reason for their opposition to the treaty, from the point of view of the inhumane consequences that these weapons cause. He argues that protecting one’s nation through threats of nuclear retaliation creates “a false sense of security.”

Toshiyuki Mimaki, 76, the chair of the Japan Confederation of A- and H-bomb Sufferers Organizations (Nihon Hidankyo) and a resident of Kitahiroshima-cho, Hiroshima Prefecture, said, “I would like the Pope to call on the countries that haven’t joined the treaty to ratify it.” The treaty will enter into force after at least 50 nations have ratified it, and 15 countries have done so as of September 20. Nagasaki Mayor Tomihisa Taue, who is working together with Hiroshima leaders to realize the Pope’s visit, believes that the Pope is “a vital presence supporting the need for the nuclear weapons ban treaty.”

Meanwhile, the Japanese government, led by Prime Minister Shinzo Abe, has also requested that the Pope visit Japan in order to boost momentum for nuclear disarmament. However, the government has clearly stated that it does not intend to sign or ratify the treaty. Last March, the Episcopal Commission for Social Issues of the Catholic Bishop’s Conference of Japan (CBCJ) sent a letter to the government, which included a quote from the Pope, asking that it sign and ratify the treaty. There seems to be no change, though, in the government’s policy.

For this reason, some are suspicious of the government’s true intentions regarding the Pope’s visit. Haruko Moritaki, 79, the co-chair of the citizens’ group the Hiroshima Alliance for Nuclear Weapons Abolition (HANWA), voiced her concern by saying, “The Japanese government may want to take advantage of the Pope’s visit by giving the impression that they are making serious efforts for nuclear disarmament, seeking to gloss over their policy of refusing to join the treaty.”

She also pointed out, “The important thing is to enhance the welcome by Hiroshima citizens for the Pope, who has made contributions to the creation of the nuclear weapons ban treaty and will, in the A-bombed city of Hiroshima, send out a message to the world to press ahead with the nuclear treaty.”