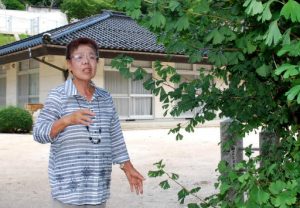 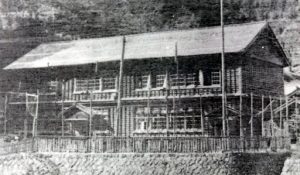 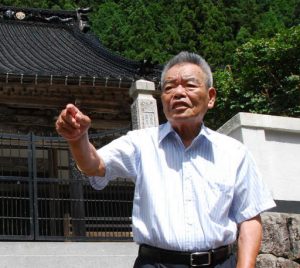 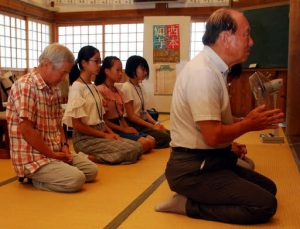 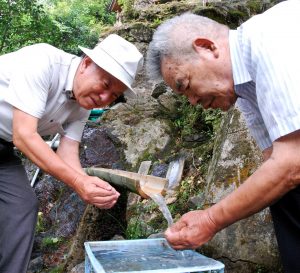 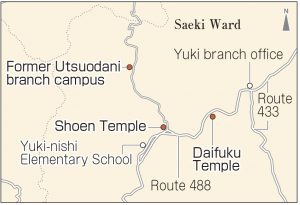 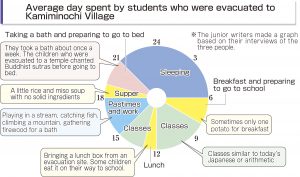 Part 59: When children were evacuated during the war

How are you spending your summer vacation? Many people will enjoy leisure time with their family or friends. But Japanese children during World War II faced a very different experience. As the Pacific War intensified and air raids on Japan continued, many children were separated from their parents and relocated to relatives’ homes or temples in the countryside to keep them safe. This was a mass evacuation of children during the war.

The junior writers of the Chugoku Shimbun spoke with three people about their experience of being evacuated to the village of Kamiminochi (now part of Saeki Ward) in groups when they were third-graders at Niho National School (now Niho Elementary School in Minami Ward). We visited their evacuation sites together and imagined their loneliness, listening to their memories of those lonely days during this time.

Shedding tears at a ginkgo tree

The buzzing sound of cicadas was vibrating in the Utsuodani district in Yuki-cho, Saeki Ward. Fumie Taoda, 82, said, “I cried at this tree with a couple of my friends.” She looked up at the ginkgo tree that still stands and tears welled in her eyes. On the site where a community center now sits, there was once a branch campus of Kamiminochi National School (now Yuki-nishi Elementary School), which Ms. Taoda attended as a child.

In May 1945, she was evacuated into the countryside in a group of other children. The amount of food she received in the meals she ate there was so meager that it couldn’t compare to the meals she had been used to at the house of her parents, who were farmers. Sometimes she had only one small steamed potato. To get a potato that was even just a bit bigger, she and other children would compete for seats. She likened it, sadly, to a game of musical chairs.

To satisfy her hunger, she would eat various things that included bitter-tasting weeds and snakes caught and grilled by boys. On rainy days when the farmers weren’t working, she enjoyed visiting a nearby farmhouse and she was given a rice ball coated with sweetened red beans, which she secretly ate up.

Ms. Taoda missed her home during that time she was away. At night she would go to the ginkgo tree and tearfully wonder if it was also appearing over her home in Niho. She prayed to the moon to take her home. There was a ginkgo tree near her home, too, and this added to her pang of longing. Nevertheless, she did not tell her family that she was lonely because the postcards she sent home were first checked by a teacher. So she had to write that she was doing fine.

In mid-September, after the war ended, she boarded a truck and returned to Niho. She was shocked to find that the heart of Hiroshima had been completely devastated, but her mother and her siblings were safe. She vividly remembers the day that her father came home after he was demobilized from the military. She hopes that children today will live happy lives, without having to endure such terrible experiences. (Kana Okino, 18)

Feeling the silence of the night

Takeshi Kodani, 82, stayed at nearby Shoen Temple while going to the main campus of Kamiminochi National School. He said, “Sometimes it was so hot that I couldn’t sleep at night, but during the day, I enjoyed playing in the stream that flowed near the temple.” He remembers those days when he looks at the Uchiodani River, where the clear water still runs.

He was evacuated two weeks later than other children, in mid-June 1945. As he said goodbye to his father at Rakurakuen and boarded a bus, tears began to stream down his cheeks. His memories of the evacuation site include the time a sixth-grader who broke the rules was scolded by a teacher and was made to climb a big persimmon tree as punishment, and playing with beanbags with girls. At night, it was quiet enough to be aware of the sound of the water nearby and he would be overcome with loneliness.

When he was sick in bed in the middle of August, his mother abruptly visited him. She stayed up all night looking after him, and the following day he was well enough to return home to Niho by truck. He remembers his mother telling him not to look when they were going through the city center. His house was all right because the nearby hill had shielded it from the A-bomb blast.

Mr. Kodani still has a wooden name tag that his father made when he used it to send a package to the evacuation site. It says, “To Takeshi Kodani, Shoen Temple, Kamiminochi Village, Saeki Gun,” in fine handwriting. He said, “My parents and I really missed each other. We mustn’t forget this sad part of the war.” (Yui Morimoto, 14)

Experiencing the bomb’s flash and boom

The bright flash and huge boom of the atomic bomb that was dropped on Hiroshima on August 6, 1945 were noticed even by the children who had been evacuated to the village of Kamiminochi. Yukio Shimokawa, 82, remembers the moment when the atomic bomb exploded.

Mr. Shimokawa was staying at Daifuku Temple in the Sugasawa district. When he was heading down the stone steps of the temple to go to school, there was a flash of blinding light around him and he heard a great boom. When he arrived at school, not even the teachers knew what had happened. Heading back to the temple afterwards, he saw cinders of newspapers drifting down from the coal-black sky. The sun looked bright red.

From that day, Mr. Shimokawa’s eyes turned red and he lay ill with a high fever. His mother was worried about him and came to visit him, and he was glad to know that Niho had not burned in the bombing. He said, “I can’t think of anything that’s more horrible than the atomic bombing. It must not be allowed to happen again.” (Yuri Furohashi, 14)

What was the mass evacuation of children during the war?

Third- to sixth-grade students of national schools (today’s elementary schools) were directed to evacuate to the countryside during the war. The Japanese government made this decision in 1944, and the evacuations began from urban areas, such as Tokyo, and extended to the cities of Hiroshima and Kure in 1945.

In the city of Hiroshima, about 25,000 children, more than 60 percent of all students, are believed to have been evacuated, including evacuations to relatives’ homes in the countryside. They went to the countryside such as mountainous regions in Hiroshima Prefecture.

Many of the students who stayed in the city of Hiroshima experienced the atomic bombing. The children who had been evacuated to the countryside were able to avoid the attack, but some lost their homes and families, despite their wish to return, and then became orphans.

What is Peace Seeds?

Peace Seeds are the seeds of smiles which can be spread around the world by thinking about peace and the preciousness of life from various viewpoints. To fill this world with flowering smiles, the junior writers, 25 junior high school and senior high school students, choose themes, gather information, and write articles.