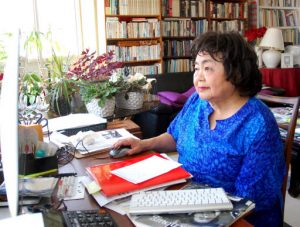 Setsuko Thurlow, 86, an atomic bomb survivor who now lives in Toronto, Canada, has described nuclear weapons as inhumane and spoken widely about her unwavering wish for the abolition of nuclear weapons from all corners of the earth. An important step toward the realization of this desire was made when the Treaty on the Prohibition of Nuclear Weapons was established last July. Ms. Thurlow then delivered a speech last December at the award ceremony for the Nobel Peace Prize on behalf of the International Campaign to Abolish Nuclear Weapons (ICAN), the non-governmental organization (NGO) that was given last year’s prize. I interviewed her about her life in a nation located far from her hometown of Hiroshima.

After I left Hiroshima to study in the United States in 1954, I got married, raised my children, and pursued a career as a social worker. At the same time, I have been working hard to support the nuclear abolition movement.

Since the time I was in high school, I continuously thought about how I should live my life. This way of thinking is based on my experience of the atomic bombing. Eight of my relatives lost their lives to the atomic bomb and many of my classmates perished, too. Why did I survive? What role should the survivors play? I encountered Christianity as well as peers and teachers at school and church while repeatedly asking myself and my teachers about these questions. My parents let me live the life I wanted. And as I’ve grown older, I imagine all their faces and I feel such gratitude.

People tend to think that they have achieved things by themselves, but in reality, they are supported by the people around them. My participation in the antinuclear movement, which has continued for many years, is made up of my collaboration with my late husband and the many others I’ve worked with.

The Nobel Peace Prize was also an opportunity to promote greater interest in Hiroshima.

Students of Hiroshima Jogakuin University, my alma mater, sent paper cranes to Oslo, Norway, where the award ceremony was held. The paper cranes were decorated in front of the Norwegian Parliament in freezing weather and they attracted the attention of many people. I was deeply touched by the efforts made by these young students. I’ve been invited to speak at my alma mater in November and I’m looking forward to seeing everyone again. There’s no place like home.

Last year was wonderful, but receiving the Nobel Peace Prize is not our goal, it is a stepping stone. In reality, there is a long way to go before the abolition of nuclear weapons can be realized. We have to make the Treaty on the Prohibition of Nuclear Weapons bear fruit in the future. I still have work to do. I want to continue to stress the inhumanity of nuclear weapons as much as I can until the very last day of my life.