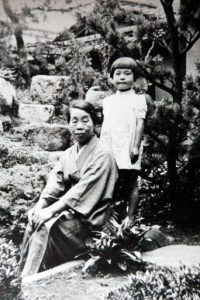 The youngest child who loved books and newspapers

I don’t have any particular memories about being spoiled because I was the youngest child in the family, but everyone treated me very kindly. Yukiko, who was closest to me in age, was still six years older and so I was always surrounded by people who were a lot older than me.

As a child, Ms. Thurlow loved books and newspapers. Every year she was in elementary school, at Kojinmachi National School, she was named an honor student. Only one boy and one girl in each grade were selected to be honor students, year by year.

I don’t remember playing with dolls very much. I was happy to read picture books, like Aesop’s Fables, that Isamu, my eldest brother, bought for me. My father regularly read me articles from the Chugoku Shimbun.

My maiden name is Nakamura and my family was the “head family” of the Nakamura clan. In addition, because my mother liked to care for others, relatives and friends were continually coming in and out of our house. Hiroshi, my uncle, had a habit of reading the newspaper while holding a cup of coffee in one hand at Myoui-ya, a restaurant located on Kinza-gai shopping street (now part of Naka Ward). As I ate the ice cream that he bought for me (ice cream was rarely found on the menu at a restaurant in winter back then), I would listen to him read the articles. He was a cheerful man who had been to the United States with his wife, relying on my father, his elder brother. My uncle said he really enjoyed skiing and playing golf during his time there.

Sadayo was Hiroshi’s wife and she believed that the Japanese would start wearing more western clothes in the future, so she learned to sew in the United States. After she returned to Japan, she opened a sewing school. I heard that my father helped finance her business. Her students would measure me and make children’s clothing at the school. They told me that I was pretty, and they clothed me in many different dresses. I felt like I had become a fashion model.

As she grew up in the city of Hiroshima, war began to intrude on her childhood.

With wars breaking out one after another, like the Sino-Japanese War and the Pacific War, our lives as citizens quickly changed. At one point, part of our home was torn down to expand the road, and the area for our house was reduced to half. I was told that the road had to be widened to bring supplies to the battleground. But, as a child, this was a big shock because it was the house where I was born and raised.

My parents and I moved to another house that was next door, which we also owned. The house that had shrunk in size was then lent out as an inn for soldiers. They were sent to Hiroshima from all parts of Japan and they spent their last night here before heading out to the front lines by ship from Ujina Port.

I heard that the soldiers would sing songs and clap their hands every night. One time I joined them at the inn and said, “I hope you come back in fine health” and everyone in the room smiled and said they appreciated my good wishes. The gathering seemed to be so cheerful but I felt an indescribable sense of melancholy and a tightness in my chest as I thought, “So this is what war is really like.”