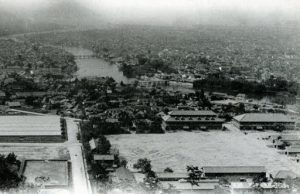 At 13, mobilized for the war effort

I was attracted to a school that offered English classes and allowed students who got good grades to take piano lessons in their second year. My mother, in particular, had spent time in the United States, and she like the organ, so she wanted me to go to Hiroshima Jogakuin Girls’ High School.

Because of the war, though, the school ran limited classes in my first year. And I remember repeating “This is a pen” after my English teacher, who was teaching us pronunciation. Then, when I entered my second year, I became a mobilized student and I had to work for the war effort every day.

I didn’t think much about the situation at the time. However, I think my parents had a different view because they had returned to Japan to ensure that their children received a Japanese education, after working hard in the United States while suffering the terrible discrimination against Japanese descendants that existed there in the early 1900s. They must have been aware of that the United States was a more powerful nation than Japan. One day, I noticed my father reading an English grammar book. He was probably considering what would happen next, while calmly observing Japanese society and the Japanese people, who believed that Japan would surely defeat the United States in the war.

As a mobilized student, I helped with farm work and also worked at the Hiroshima Army Clothing Depot and the Hiroshima District Monopoly Bureau. In July 1945, I was mobilized to help decode the encrypted messages sent from the war front. In this job, I was required to quickly replace the encrypted messages with languages that made sense by making additions and subtractions based on a code chart. Considering that young girls were made to engage in such an important task, I think that Japan was fighting a very reckless war. Ironically, it is said that the U.S. military was also intercepting and decoding Japan’s encrypted messages. I had no idea, and I worked hard to learn how to decode these messages.

On August 6, 1945, after completing her training, Ms. Thurlow was ready to start her first day as a decoding assistant.

On that morning, the group of decoding students assembled in front of Hiroshima Station and marched in orderly lines to their workplace at the Second General Headquarters in Futaba-no-sato (now part of Higashi Ward). I was at the front calling out the marching commands: “Head to the right!” and “March in step!”

Upon reaching the wooden headquarters building, about 40 of us went up to the second floor to listen to the instructions given by Major Kenji Yanai who demanded that we do our utmost to fulfill our duty in the name of the emperor. At the very moment I was about to start working, I was engulfed by a tremendous flash of light and I was blown off my feet.