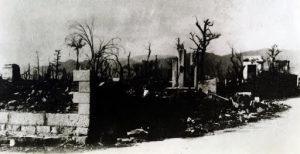 Amid darkness of A-bombing, crawling toward the light

Setsuko Thurlow was 13 years old when she experienced the atomic bombing while at the Second General Headquarters, located about 1.8 kilometers from the hypocenter. She became trapped under the building, which collapsed in the bomb blast.

When I came to after being blown off my feet, I found that everything was pitch-dark. I was pinned down by a beam and I couldn’t move. Then I began to hear my classmates’ pitiful cries: “Mother!” and “God, help me!” I thought I was going to die, but for some reason, I wasn’t distressed.

Suddenly, I felt someone grab my left shoulder and I heard the voice of a soldier encouraging me, saying, “Don’t give up! There’s light to your left. Crawl toward it.” Following his instructions, I crawled frantically toward the light. When I was finally able to escape from the wreckage, I realized that a ferocious fire was already roaring behind me. Most of my classmates were still trapped under the building and they were burned alive. I have no idea what happened to the soldier who saved me.

Outside, it was as dark as night and I found myself gazing at scenes from hell. Almost everyone had their arms out, around their chests, and their shredded skin was dangling down from their bodies. Some were holding their own eyeballs in their hands, because the bomb blast had popped the eyeballs from the sockets. Ghostly figures were staggering slowly and collapsing on top of one other. I tried to be very careful not to step on any bodies as I desperately fled from the inferno with some of my classmates.

When she reached the nearby East Drill Ground, there was chaos at that site, too.

People on the verge of death were begging me to give them water. Unfortunately, I didn’t have a bucket. And some soldiers there warned me not to give them water, anyway, because it would only hasten their death. But it was impossible for me to just leave them to die without doing something for them. So I took off some clothing and tore it apart, then soaked it with water in a nearby creek and brought the moistened cloth to their mouths. Then they sucked it up.

I don’t know how many people I did that for, but the water from the creek eventually became the water of their last moment. Although I became covered in blood when I got trapped under the building, I wasn’t seriously injured. So I spent the rest of the day, until sunset, going back and forth between the creek and the wounded people.

I spent the night in the brush on Mt. Futaba and heard mournful groans that went on intermittently. My house was located just across from Hiroshima Station, but for some reason, I didn’t go home. I had no clue as to whether my family and friends were still alive or not. That was before I found out that my house and my school, Hiroshima Jogakuin Girls’ High School, had been burned to the ground.