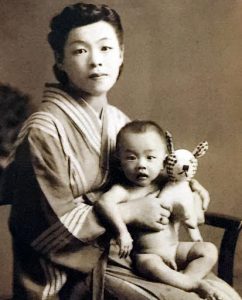 Trauma over deaths of sister and nephew

On the day after the atomic bombing, after I spent the night on Mt. Futaba, I heard a soldier shouting my name through a megaphone: “Setsuko Nakamura!” My father had come, searching for me. He had escaped the A-bomb attack because he went fishing at Miyajima Island (now part of Hatsukaichi). My mother barely survived after fleeing for her life from our house, which collapsed in the blast.

Ms. Thurlow’s joy of being reunited with her parents lasted only a short while. She was soon faced with the deaths of other family members, including an older sister and her nephew.

My relatives lived in the same neighborhood, and I found Ayako, my second eldest sister, and Eiji, Ayako’s 4-year-old son, at that house. Apparently, Ayako and Eiji were at the foot of Yanagi Bridge, at the Kyobashi River, at the time of the bombing.

Both of them looked miserable with swollen faces and peeling skin. The only thing I could do for Eiji, who wanted water, was to push open his small mouth and squeeze in juice from a frozen tangerine. A soldier from Division No. 5 of the Japanese Imperial Army had secretly given it to me. There was little I could do for them, though, and they died one after another. Ayako was a headstrong woman, which wasn’t common in those days, and I respected her. My little nephew was at a time of life when he was so lovable.

Their deaths were a traumatic experience for Ms. Thurlow.

Their bodies were cremated at Mt. Futaba. Soldiers splashed oil over them and lit them on fire. Then they rolled them over, saying things like, “The belly of this one isn’t burnt yet” and “The brain is only burned halfway.” Surrounded by the strange smell, I just gazed at them quietly. I couldn’t cry at all. After that, I continued to blame myself for not grieving over their deaths at that time. But then I learned, later on, that there’s a psychological reason why I couldn’t. Under such extreme conditions, human beings numb their emotions in order to protect their minds.

The uncle who bought me ice cream in winter and the aunt who clothed me in handmade dresses escaped injury while in Ushita (in today’s Higashi Ward) on that day. However, they soon came down with purple spots on their bodies, an effect of their exposure to the bomb’s radiation, and they died in pain.

Michie, the wife of Isamu, my eldest brother, was a teacher and she had taken mobilized students from Yamanaka Girls’ High School (now Hiroshima University High School in Fukuyama), which was located in Senda-machi (part of present-day Naka Ward), to help tear down homes to create a fire lane. She and all of the more than 300 first-year and second-year students were killed at Zakoba-cho (now part of Naka Ward), near City Hall, and their remains were never found. As my brother had already died on the Korean Peninsula four years before that, Masataka, Isamu’s eldest son, became an orphan at the age of seven. I heard that he continued to visit the train station in search of his mother, hoping that she might one day return.

In a single moment, the blast of one atomic bomb completely tore to pieces the dynamic lives, and the human dignity, of my family.