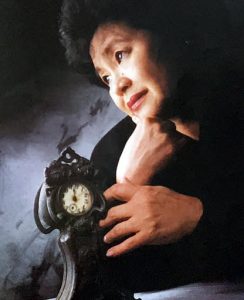 Vow to live on after emotions explode

Masami, my third elder brother, died of illness when he was young. Then, following my eldest brother’s death from disease, I lost my second elder sister to the atomic bombing. As a result, the number of children in my family was reduced from seven to four.

Around August 8, I returned to my home with my parents and Yukiko, my elder sister who was able to escape the bombing. Our house was completely burned to the ground. Rice bowls that had been stacked together had melted into a deformed mass. Our lacquerware pieces, which had been carefully kept in the storehouse, had disappeared without a trace. My mother once told me that this lacquerware had come from the Asano Family, who were the family of lords in Hiroshima. The only thing I could dig out from the still-warm ground, with my fingernails, was our metal table clock. Later, I donated it to the Canadian War Museum, located in the capital of Ottawa, in order to help convey the Hiroshima bombing to the next generation.

My parents and I, who had lost everything because of the bombing, stayed at the home of Shuichi Nanba, my maternal uncle. Mr. Nanba had lost his wife and two children. Though everyone was experiencing a tough time back then, the members of Mr. Nanba’s family lent us their support, both materially and mentally, and for that we were very grateful.

Ms. Thurlow then endured the deadly Makurazaki typhoon, too.

I didn’t cry when I experienced the atomic bombing. But my emotions exploded when the Makurazaki typhoon hit Hiroshima that September, just a month after the A-bomb attack. I was on my way home in torrential rain, which rose to my knees, and I was in danger of getting swept away. During this distressing ordeal, I wondered, “I had to face the atomic bombing, and now this typhoon. Why am I being tormented like this?”

When I got home, I burst into tears. I still remember how my father responded. He was furious and told me, “Do you understand that we’re fortunate just to be alive and living under the same roof?” His words hit me like a hammer, and opened my eyes to the truth. I realized that I was still alive and I would go on with all my strength.

Her school resumed classes in October in classrooms rented at Ushita National School.

Returning to school brought new light into my life. My classmates and I were happy to see each other again. But there was also the harsh reality of radiation sickness. I suffered some acute symptoms from my exposure to the A-bomb’s radiation, including hair loss and bleeding from my gums, but my symptoms weren’t as severe as other people. Despite the fact that the war was now over, and no air strikes would take place, some students continued to wear air raid hoods that covered their hairless heads. When roll call was made each morning, the teacher sometimes stopped calling out the names of some students. Every morning I would fearfully check to see if any purple spots were appearing on my body.

The atomic bombing claimed the lives of 351 people from Hiroshima Jogakuin Girls’ High School. After that, the surviving students went on, side by side, with the anixiety of illness and the fear of death. To me, that was the starting point of my anger and action.