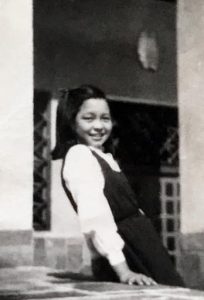 Nine days after the atomic bombing, I heard the broadcast of Emperor Hirohito announcing Japan’s surrender. I was in a woodsy part of Mt. Futaba, where my relatives had a second home. There was a lot of static on the radio, but I understood what the announcement meant when I saw soldiers collapsing and breaking into tears. I actually felt relieved and somehow had a sense of liberation.

In 1946, we moved to a temporary school building on Ushita Hill from Ushita National School, where we had been using some classrooms. The building was hastily built. When rain hit the metal roof, it was so noisy that we couldn’t hear the teacher. And the classrooms were so drafty that we jokingly referred to the building as the “Fukiage (Blown-up) Mansion,” equating it with the Fukiage Palace, the emperor’s residence. There were shortages of things everywhere.

Ironically, our lives were saved, in a way, by the United States, the country that had dropped the atomic bomb. In 1946, my elder sister Fumiko, who lived in the United States, was released from the Tule Lake War Relocation Center in California, an internment camp for Japanese-Americans. She began sending us big care packages filled with nutritious food like thickly-sliced bacon, which my father particularly liked. I know her family also lost everything in the war, but they helped us just the same.

I felt like I was breathing fresh post-war air deep into my lungs. In November 1948, I was a second-year high school student under the new educational system. At my suggestion, we launched the Hiroshima Jogakuin Koko Shimbun (Hiroshima Jogakuin High School Newspaper). We were exercising our free-speech rights given by the new Constitution. I devoted myself to this newspaper.

The head office of the Chugoku Shimbun used to stand where the Mitsukoshi Department Store is now located. There I learned from scratch how to lay out a page from professional copy editors. When I ran up the stairs, I could smell the ink, which excited me.

Among the members of the newspaper club was the late Junko Morimoto, who lived in Australia and became a picture book author. We wrote editorials and opinion pieces. I borrowed a bicycle from an American teacher and visited companies to sell advertisements. We were able to see new movies at the movie theater for free, in return for writing movie reviews. Then I entered Hiroshima Jogakuin University. There I was involved in launching the university’s newspaper with help from the Chugoku Shimbun.

I always say that I owe a lot to the training the Chugoku Shimbun gave me, and I mean it. After I wake up each morning, the first thing I do is read news about the atomic bombing and peace at the Chugoku Shimbun’s website. This enables me to feel that I’m keeping close ties with my hometown.