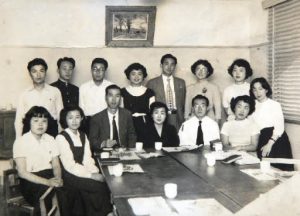 Believing in a faith of “love and action”

During my high school and university days, I enthusiastically took part in various activities organized by the Young Women’s Christian Association (YWCA). When I was in high school, I served as the student president of the YWCA. Through the YWCA activities, I became involved in the first Upper House election held in 1947. The Tokyo YWCA urged me to support Ochimi Kubushiro, an activist in the women’s liberation movement activist who was running for national office. In the Lower House election held that previous year, Japan had just produced its first female Diet members. Although Ms. Kubushiro fell short in the election, I was really excited to support women’s suffrage while helping with her election campaign.

Although I enjoyed my high school days a lot, I felt a strong urge to search for the meaning of life after my experience of the atomic bombing. The atomic bomb that was dropped on Hiroshima burned my sister and my nephew alive, transforming them into unrecognizable hunks of melted flesh. My classmates were also burned alive in the building that I had managed to crawl out from and flee. I heard that my schoolmates, who experienced the bombing while helping with the war efforts in Zakoba-cho (in today’s Naka Ward), formed a circle despite being on the verge of death. They all eventually died, one by one, while singing the hymn “Nearer My God to Thee.” I was able to survive, but not a day went by that I didn’t think of them.

The days were like a journey where I was searching for the right words to express my feelings. Every morning, I arrived at school early and asked the teachers of religious studies questions like “If God really loves us, why has he been so cruel to Hiroshima?” and “What does ‘living well’ really mean?” The teachers discussed these questions with me sincerely.

There, I encountered the late Reverend Kiyoshi Tanimoto, who became an important mentor in my life. He worked very hard to help the A-bomb orphans who lived on the streets near Hiroshima Station and in other parts of the city, and devoted himself to advocating the “moral adoption of A-bomb orphans.” In the late 1940s, he took several trips to the United States, the country that dropped the atomic bombs on Japan and whose people, by and large, supported the bombings, and he emphasized the catastrophic damage caused by the bombs.

One day, I was impressed by a passage that I found in a leaflet published by the World Council of Churches. The passage stated that peace is not only the absence of war, but also a process of efforts to provide social justice to all people. It was then that I decided to believe in a faith that is centered on love and action, which Mr. Tanimoto would always preach about. In December 1948, just before I turned 17 years old, I was baptized at Nagarekawa Church.