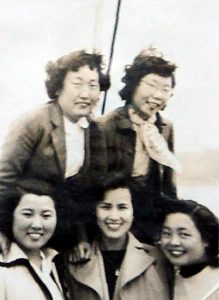 New paths as a university student

I never thought of going to a university in another prefecture. I knew adults were working very hard to reconstruct the city after it was burned to the ground by the atomic bomb, so I felt strongly that should play a role in this recovery.

With nuclear tests being pursued by the Soviet Union, the outbreak of the Korean War, and fears that the United States might use nuclear weapons again, it was a tense time back then. It was at that point that I met Ichiro Moritaki, a professor at Hiroshima University, who became a mentor to me. Mr. Moritaki was a leader of the hibakusha and the campaign against atomic and hydrogen bombs, and he was also involved in the YMCA at Hiroshima University. He taught students about the nuclear age, and the threat it poses to humanity, and the stance of absolute pacifism. I became absorbed in the antinuclear movement and enjoyed working alongside male students, something that was unimaginable during the war.

Ms. Thurlow majored in English literature and made use of her English ability in her activities. Then came an event that would have a lasting impact on the course of her life.

In the fall of 1952, after the San Francisco Peace Treaty took effect and Japan formally regained its independence, the first World Federalist Conference in Asia was held in Hiroshima. It was the first big international conference held in the city and I served as an interpreter. The World Federalist Movement originated in Europe and the United States, and Reverend Kiyoshi Tanimoto was involved in this movement.

One of the people who attended the conference was Dr. Joseph Hunter, a scholar of religious studies from the University of Lynchburg in the U.S. state of Virginia. I shared with him my thoughts on the antinuclear movement and he suggested that I study in the United States and speak out there. I hadn’t thought of doing that.

I talked to Hamako Hirose, the president of Hiroshima Jogakuin University, as she had studied at Columbia University before the war. She said that I should study social welfare there and bring that knowledge back to Hiroshima. She also offered the encouraging words that, under Japan’s new Constitution, the time had come when women could play active parts in society. In those days, people in Japan didn’t typically think of social welfare as a structured academic discipline, so the idea sounded very fresh.

Like the time I was baptized, my parents respected my decision. They were born in the Meiji Era (1868-1912), but they used to say, “Setsuko should become a lawyer,” or “No, she should be an educator.” In a way, they wanted me to live a life that was beyond being a good wife and wise mother.

Then the next year, I met my future husband. Surprisingly, that encounter took place in Hokkaido.