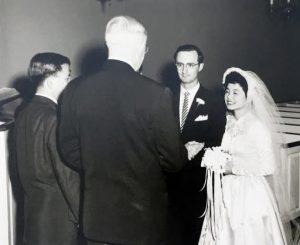 Studying abroad and getting married

In the summer of 1954, shortly after Setsuko Thurlow arrived at the University of Lynchburg, located in the U.S. state of Virginia, there was an “incident.”

It was six months after the United States conducted a hydrogen bomb test in the Marshall Islands, in the Pacific Ocean, and the crew of the Daigo Fukuryu Maru (The Lucky Dragon No. 5), a Japanese tuna fishing boat, was exposed to radioactive fallout from the bomb. I was interviewed by a local newspaper and I commented that Hiroshima and Nagasaki should be the end, not the beginning, of all nuclear testing. After that I started receiving threatening letters which said, “Don’t forget the attack on Pearl Harbor,” “Go back to Japan,” and even, “I will kill you.”

Ms. Thurlow struggled with this turn of events, wondering what it meant that she, an A-bomb survivor, had come to the country that dropped the atomic bomb.

I hid myself away in my room and shivered in terror and isolation. But I simply couldn’t imagine that I was wrong. After being tormented by this harsh response, I decided that I would not stay silent and that I would continue to convey my thoughts. This was the fresh start of my life as a hibakusha.

I volunteered to share my experience of the atomic bombing at gatherings held at the university or by Rotary clubs. While working hard at my studies, I took every opportunity to interact with other students. I was blessed with more warm relationships than those that hurt me.

But when I received the heartbreaking news of my father’s death in February 1955, I was filled with sorrow as well as gratitude. Before he drew his last breath, he left the greatest gift in giving his consent to my marrying Jim Thurlow. Later, I was told that Reverend Kiyoshi Tanimoto, who was concerned about us, talked my parents into letting us get married.

After she finished her studies in the United States, Ms. Thurlow married Jim in July 1955 after he returned from Japan.

In those days, state law in Virginia prohibited whites and non-whites from marrying. In addition, Canada, Jim’s home country, had tight restrictions on people moving there if they didn’t have relatives in Canada. So we went to Washington, D.C., where the law didn’t discriminate by race, and the wedding took place there. Reverend Tanimoto was able to attend because he was in New York at the time, helping some female A-bomb survivors receive medical treatment for the burn scars they suffered in the bombing. One of my relatives on my mother’s side attended the ceremony in my father’s place. It was Mike Masaoka, a lobbyist who after the war helped pass the legislation on compensating Japanese Americans for the hardships of their internment during the war.

In May of this year, I visited the University of Lynchburg again, 64 years after I expressed my thoughts on Hiroshima and was savaged for it. I received an honorary doctorate and I told the students about the horrific devastation caused by nuclear weapons. I have renewed my determination to continue speaking out about my experience.