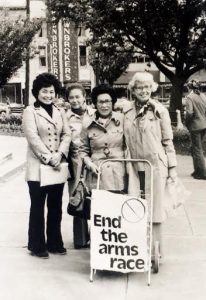 In 1970, I was employed as a social worker by the Toronto Board of Education. In our team of three, which included a psychiatrist and a psychologist, we visited the elementary schools, junior high schools, and high schools to which we were assigned. We discussed with the schools how to address cases of bullying, a decline in academic performance, and other concerns.

In addition to understanding the family background of each student, it was critical to grasp the cultural background, too, as Canada has many immigrants. We had to work with both the school and the family, and also maintain the confidentiality of the information. It was a stressful job. But whenever I gained the trust of a mother who had gone through hard times alone, and she thanked me for listening to her, I found the work very rewarding.

Ms. Thurlow began to have more opportunities to tell about her experience of the atomic bombing.

I was so busy raising my children, until those days I would only occasionally share my account at a church, when asked. My husband Jim was a history teacher at a local high school, and I was working, too. But when I moved to the board of education, teachers started to ask me to talk about the atomic bombing at their schools.

Although Canada, as a nation, has been involved in nuclear issues, many of the people there are uninformed. Canadian scientists were involved in the development of the U.S. atomic bombs, and the indigenous people of Canada were abused in mining the uranium that was used to make the bombs. Also, in May 1975, India conducted a nuclear test, misuing a nuclear reactor provided by Canada. The 30th anniversary of the atomic bombing was approaching, so I felt that I had to fulfill my duties as a survivor, that I couldn’t sit still.

We first tried to rouse public opinion, so we appealed to a group of college professors and embarked on a nationwide fundraising campaign. We ran three advocacy ads in newspapers, backed by more than 300 names, calling for the total abolition of nuclear weapons. We got a much stronger response from the public than we had expected.

I also felt that an atomic bomb exhibition, the first event of its kind in Canada, would help people more easily understand the atomic bombing. I shared my idea with Kazuko Tsurumi, a sociologist who I had known for some time. She said, “Make it a success. I myself would like you to hold the exhibition.” I asked the Hiroshima city government for its cooperation in the summer of 1974 when I visited my hometown, and city officials readily consented to my request.

I asked people to join me in Canada, and wonderful people that included lawyers, peace activists, and writers came together for the event. This was the beginning of my ongoing ties with antinuclear activists. Every night, our house was bustling as people made preparations and held meetings to realize the exhibition. Jim and I were always frantically busy.