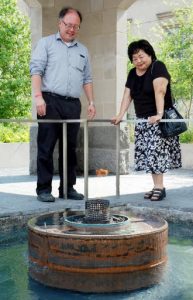 Education for nuclear disarmament and peace

I take pride in the fact that I made every effort to have school administrators be responsible in establishing education for nuclear disarmament and peace during the roughly 20 years I worked for the Toronto Board of Education in Canada. When I was first asked to start sharing my account of the atomic bombing at schools in the 1970s, what I felt, more than pleasure, was a growing concern that depending on the efforts of thoughtful teachers just wasn’t enough and I had to create a system so that all the students could learn the meaning of living in the nuclear age as a personal part of their lives.

In 1986, we invited students from 100 senior high schools in Toronto to enter a composition contest on the theme, “The Meaning of Hiroshima and Nagasaki,” in line with my suggestion, then dispatched the two students who won the grand prizes to Hiroshima as peace ambassadors. In addition, my written account of my A-bomb experience was incorporated into a school textbook. And in 2003, I set up a scholarship system for graduate students who intended to study about nuclear disarmament and peace. Through efforts like this, I could help nurture a desire for peace in the next generation.

I also did my best to build the Peace Garden in front of Toronto City Hall. I went to Hiroshima and took back an ember from the Flame of Peace in the Hiroshima Peace Memorial Park, and Pope John Paul II himself kindled Toronto’s Flame of Peace in 1984. The flame has since continued to burn in the center of Canada’s largest city. This is also the place where we hold our peace memorial ceremony each year.

Around 1990, Ms. Thurlow took on the challenge of pursuing a new venture. She founded the Japanese Family Service of Metropolitan Toronto, a social welfare organization.

The Japanese-Canadian community in Toronto varies from immigrants and their descendants to expatriate staff and their families, and some of them can only speak Japanese. However, there was no information desk that could respond in Japanese to a request for consultation about problems, such as a child’s behavior or services for the elderly. I resolved to devote myself to meet these urgent needs.

When I was facing financial difficulties and I applied for a grant, I was told that the Japanese-Canadian community was rich, and it was hard to find professionals who were versed in Japanese affairs. It was a tough time. But I did all I could to maintain my activities and help advance the abolition of nuclear weapons at the same time. Before turning 70, I handed over my organizations to successors and I retired from the front lines.

After that, I continued sharing my experience of the atomic bombing at the United Nations and other places. And it became clear to me that the nuclear-armed states have no intention of reducing their nuclear arsenals when the interests of these nations are at odds with the the goal of disarmament. As my anger rose, I crossed paths with an organization called the International Campaign to Abolish Nuclear Weapons (ICAN).