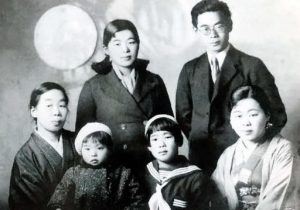 Family immigrates to the United States

Setsuko Thurlow’s maiden name was Nakamura. She was born in 1932 in what is now Higashikoujin-machi (part of Minami Ward) as the youngest of seven children. She had three older brothers and three older sisters.

The Nakamura family were once retainers of the Hiroshima domain during the Edo period. After the Meiji Restoration, the family apparently had trouble making ends meet. But it is said that Yataro, my grandfather, had a connection to Sadaaki Senda, who was the governor of Hiroshima back then, and he became actively involved in the construction plan for Ujina harbor, which was considered a difficult project.

In order to support the household, Benkichi, my father, immigrated to the U.S. state of California when he was still in his teens. He worked really hard and studied English. Eventually, he was able to manage a large orchard outside Sacramento. Because of laws against Japanese nationals at that time, he wasn’t allowed to own the land himself but he ran the orchard in partnership with a German. So my five siblings were born in the United States. After earning enough money, my family then returned to Hiroshima, where I was born. Shigeno, my mother, seemed to like living in the United States. When she played the organ she had learned to play in America, she seemed to feel nostalgic about the nation. She and I would often sing songs together as she accompanied us.

The paths her sisters and brothers took were like representations of the path Japan had taken during World War II.

My mother was 45 years old when I was born. There was an age difference of 20 years between my eldest brother, Isamu, and me. He died of illness in 1941 while working as a teacher at a school on the Korean Peninsula, which was then under Japan’s colonial rule. I was told that the Korean people were kind enough to mourn him by holding a funeral at the school, which my parents attended. I remember that my mother was grief-stricken when she returned to Hiroshima and said, “We should respect the Korean people. Discriminating against them is unacceptable.” I still treasure the childhood memory I have of Isamu saying to me, “Setsuko-chan! Let’s go swimming at the Ujina shore!” I loved him very much.

Susumu, my second eldest brother, became an officer in the Imperial Japanese Army and served in Taiwan and the Korean Peninsula. Because of his English ability, he was made an interpreter at talks between Masaharu Homma, the lieutenant general who was involved in the Bataan Death March in the Philippines, and the U.S. commanding officer. He also appeared in the photo that was taken on that historic occasion. In the aftermath of the war with the country where he was born, he was nearly faced with the ordeal of being indicted as a war criminal.

My eldest sister, Fumiko, returned to the United States to get married. At the end of the war, she was in a Japanese internment camp known as the “Segregation Center” in Tule Lake. Fumiko’s eldest son, George Takei, became a famous actor who appeared in the popular American TV series “Star Trek.”

My older brothers and sisters lived during the time of war on either side of the Pacific and my parents must have been terribly worried about their future.