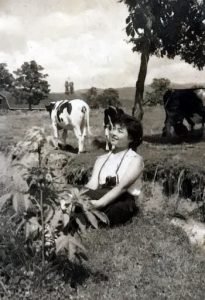 When Setsuko Thurlow was in her senior year at Hiroshima Jogakuin University, she took part in an international Christian work camp during the summer break and did volunteer work at the Mitsui coal mine in Bibai, Hokkaido.

We were volunteers, helping to build a community hall to hold labor union activities and a playground where the children could play. A Canadian missionary who taught English at Kwansei Gakuin University, Jim Thurlow, was also at the work camp.

Jim was a gentle man and he worked very diligently. When we engaged in discussion about our faith, he was very passionate in saying that we must have the courage to fight against social injustices. My first impression of him was that he was a person of honor and principles.

At first, I didn't think of him in a romantic way because we were spending each day as part of a group doing strenuous work, like carrying lumber and mixing cement. But Jim stood out to me. After the camp concluded, he often visited Reverend Kiyoshi Tanimoto of the Hiroshima Nagarekawa Methodist Church and stayed there even though he was living in Nishinomiya, in Hyogo Prefecture, where his university was located. That was when we started dating. Because of his sincere character, I became convinced that I wanted to spend my life with him.

At that time, however, I had already decided to go to the United States to study, but Jim had to stay in Japan because his dispatch assignment had not been completed. So he probably experienced some inner conflict over this. At the same time, my parents were concerned about our relationship and, in those days, it was unthinkable for me to go ahead and get married without first receiving my parents’ approval. In the end, I went through with my original intention to go to the United States, while Jim and my parents remained in Japan.

In the summer of 1954, after graduating from college in Japan, Ms. Thurlow traveled to Virginia, a state on the East Coast of the United States.

Just before the ship left Nagoya for the United States, Jim secretly took out an engagement ring from his pocket so no one see. It was an unexpected surprise.

I was scheduled to meet Dr. Floyd Schmoe, a peace activist, once I arrived in Seattle, one of the ship’s ports of call. When I first met him, he was spearheading a voluntary project to build housing for A-bomb survivors near Hiroshima Jogakuin University. Plans were made for Dr. Schmoe to look after me on the West Coast, and for Joseph Hunter, a professor at Lynchburg University, to look after me on the East Coast.

My two-week voyage across the Pacific Ocean was terrible because of bad weather. As a result, one of the ports of call was changed and I missed the chance to connect with Dr. Schmoe. Instead, I ended up staying with my eldest sister, Fumiko, in Los Angeles, where she was living at the time. Arrangements had been made for the cost of my trip to America to be covered by a U.S. organization called the Japanese Association of University Women and for the university tuition to be covered by a scholarship, but the air ticket to fly from California to Virginia was paid for by Fumiko.