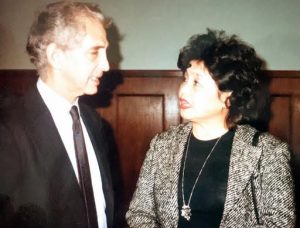 With the support of the mayor of Toronto, the A-bomb exhibition took place at Toronto City Hall, the ideal location. The exhibition was a big success and it gave me the confidence that some people would surely be interested in my activities if I approached them and made an appeal. There were calls to continue our efforts, which led to forming a citizens’ group to learn from Hiroshima and Nagasaki. That group has since grown into an organization which brings together various local citizens’ groups. For the past 43 years, it has held a memorial ceremony on the anniversary of the atomic bombing at the square of front of City Hall.

I also devoted myself to giving more energy to peace education and the antinuclear movement. However, our activities in North America are prone to becoming a target of hate by anticommunists, and I’ve had to endure some difficulties as well.

I once took part in a peace gathering in the United States and the venue was surrounded by protesters who spat on me. In 1982, I was invited to Ottawa, the capital of Canada, to deliver a speech at an exhibition of A-bomb pictures, but an uproar broke out over a bomb threat. As I had already left, I wasn’t directly affected, but when I learned about the threat afterward, a feeling of horror went down my spine.

I often provided support for antinuclear activists. I still remember the humiliation I faced when I went to a Massachusetts court in 1983 to support seven activists who had broken into a U.S. plant that produced nuclear weapons and were arrested.

Because the defendants asked us to testify about the true consequences of nuclear damage, I went to the court with Daniel Ellsberg, who had disclosed the Pentagon’s secret documents concerning the Vietnam War and was an expert in international law. However, as I had predicted, the chief justice was a nasty man who told me that Hiroshima was an event that had occurred a long time ago and he didn’t allow me to testify.

To me, the judge’s behavior was nearly akin to denying the suffering of the A-bomb survivors completely. So I couldn’t stay silent. I shouted out in the courtroom, “People in Hiroshima are still dying!” My shout threw the court into confusion. One of the defendants then rushed over to me and began singing a song called “We Shall Not Be Moved,” a song that was symbolic of the civil rights movement. The other defendants joined in, one after the other. They put their arms around each other’s shoulders and sung the song together in front of the judge.

I know there are many people who risk their lives by campaigning for the abolition of nuclear weapons through acts of non-violence and non-conformity, without drawing much attention from the people of Hiroshima and Nagasaki. I just wanted to respond to their dedication with my support. It was very disappointing that I couldn’t be of much help to them and all seven defendants were pronounced guilty.