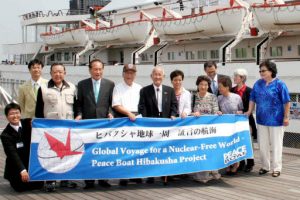 About 10 years ago, Setsuko Thurlow’s encounter with ICAN helped propel progress in the antinuclear campaign.

A branch of the International Campaign to Abolish Nuclear Weapons (ICAN), which was established mainly by antinuclear doctors in Australia, was established in Canada in May 2007. The inaugural meeting was held at the national assembly building, and I was invited to take part as a speaker. Frankly, I thought that the meeting was nothing more than an antinuclear gathering, and I never expected to see the subsequent developments of the campaign.

That next year, I had a very unique experience as an A-bomb survivor who lived outside Japan. I was invited to join a round-the-world voyage organized by Peace Boat, an NGO based in Tokyo, and I spent time on the ship with 102 fellow A-bomb survivors who were also invited to take part. Among them were many survivors who were reluctant to talk about their A-bomb experiences, saying that they weren’t qualified to do so because, at the time of the bombing, they were too young to remember anything. But by the time they had finished the four-month voyage, the bright expressions on their faces showed that they had accepted their responsibility as A-bomb survivors to share their experiences with others. I was so delighted with their enthusiasm.

The atomic bomb destroyed local communities and families, and has negatively affected people who have no memory of that time as well as their family members. It has damaged the lives of everyone it touched. Therefore, it’s not enough to talk only about the catastrophe of that day. Even if people don’t remember anything about the day itself, they can still tell others in the world about the experiences they’ve had and their own opinions concerning nuclear weapons and peace.

When I took part in the Peace Boat voyage, Akira Kawasaki was already, and continues to be, a member of the executive committee of the Peace Boat organization. He later joined forces with ICAN, too, and has shown great leadership.

The NPT Review Conference in 2010, held at the United Nations, inspired a new trend in the antinuclear campaign.

The nuclear weapon states have never tried to live up to their obligation to reduce their stockpiles of nuclear arms, as stipulated in the Treaty on the Non-Proliferation of Nuclear Weapons (NPT), and this has given rise to strong anger among civil society and the non-nuclear nations. At the Review Conference in 2010, a document that emphasized the inhumane nature of nuclear weapons was adopted at the U.N. meeting.

This is when ICAN began its rapid expansion, promoting the idea that a new treaty which bans all inhumane weapons should be created. Young people have been courageously lobbying the ambassadors of each country and they quickly share information and tactics with people all over the world through social networking services. Professionals who have devoted their lives to campaigning for nuclear disarmament have also made important contributions toward the creation of the treaty by using their abundant experience. I myself have passionately called out the folly of depending on nuclear weapons. With this dual approach of emphasizing the inhumane nature of nuclear weapons and the A-bomb experiences of the survivors, our campaign to abolish nuclear arms got off to a very strong start.