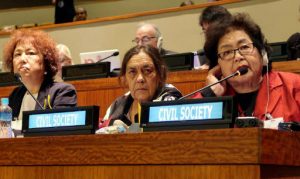 Negotiations at the United Nations for the nuclear weapons ban treaty

Setsuko Thurlow, in urging U.N. representatives of the world to take action in her efforts as an A-bomb survivor and campaigner for the International Campaign to Abolish Nuclear Weapons (ICAN), gradually became a symbol of international public opinion seeking the creation of a nuclear weapons ban treaty.

In March 2017, negotiations to establish a nuclear weapons ban treaty finally began at U.N. headquarters in New York. I had the opportunity to speak at the conference hall and I told the U.N. representatives from all over the world that the spirits of hundreds of thousands of people who perished as a consequence of the atomic bombings 72 years ago were looking down at us in that hall, and I called on them to engage in negotiations that could ensure that the deaths of every single one of these people would not be in vain.

At the time, I wondered whether the participants could understand the Buddhist view of the world, so I felt very relieved when many of the diplomats came up to me after my speech and said they found my words very impressive. At that moment, I felt that I had been right to speak out as I had originally intended. The nuclear weapons ban treaty does not only serve to help ensure the survival of both present and future generations. It is also an international agreement whose implementation is grounded in sincere reflection on the wide range of victims, including those who have died as a result of nuclear testing.

On July 7, the Treaty on the Prohibition of Nuclear Weapons was adopted, at long last, with the support of 122 nations and regions. It was the moment that all citizens of the world, including A-bomb survivors, ICAN campaigners, and the many nations that passionately worked together to promote the abolition of nuclear weapons, made history. “This is the beginning of the end of nuclear weapons.” The words I spoke in the conference hall were filled with emotion and there was much excitement among the participants over the realization of the treaty. As my words suggest, we really were standing at the real starting point of nuclear abolition.

For its contribution toward this goal, ICAN received the Nobel Peace Prize.

The awarding of the Nobel Peace Prize to ICAN is an acknowledgement of the work undertaken by all the individuals and organizations that have made tremendous efforts to eradicate nuclear weapons from the earth. As one of those who knew well all the hard work that ICAN had done, the decision of the Nobel Prize Committee to bestow ICAN with the Peace Prize was a supreme delight. In addition, I was invited by the members of ICAN’s International Steering Committee, in a unanimous decision, to take the stage at the award ceremony held in December.

My fellow campaigners have often told me how inspired they are by my thoughts and words, and this has made me feel very honored. Actually, it is I that has been encouraged by their remarkable knowledge and energy. I accepted their offer, which was a tremendous honor for me, in the hope that I could be of help to ICAN.

In creating my speech for the award ceremony, I went through an elaborate process of polishing the text. In the process, I was also in close consultation with certain ICAN members. So the speech, too, was the fruit of my collaboration with ICAN.