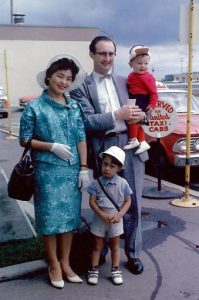 In the summer of 1955, Setsuko Thurlow and her husband Jim began their married life in Toronto, Canada.

I was a newlywed, but I was also determined to continue my academic work in social welfare. So, that September, I entered the graduate school at the University of Toronto to study social work. The campus was located in downtown Toronto, Canada’s largest city. It was a new environment and a new challenge for me.

The theme of my research involved theories and techniques of “group work” for addressing issues in families, schools, or communities through discussion among the people concerned. In particular, when I was engaged in the practical work, I had to dive deep and question myself again and again. I was wondering if I had ever adopted an arrogant attitude, even for a moment, toward people who suffered from issues like poverty or domestic violence, or if I had always treated them with dignity.

I also studied the generation gap and its impact on awareness and decision-making among the people of the Japanese community in Canada, and I earned my Master’s degree in two years. I was studying like mad.

In 1958, Jim was dispatched to Japan again, and he taught history at Kwansei Gakuin University. I went with him, gave birth to Peter, our first son, in 1959 and Andy, our second son, in 1961. So, when we returned to Toronto in 1962, our family had grown to four, with two new little members.

I tried hard to acquire typical Canadian housekeeping skills. For instance, I made a shopping list every Thursday and then bought a bunch of things on the list at the supermarket by pushing a big cart through the store. I made it a habit to polish the floors of our house and iron the bed linens each week.

While enjoying those happy days with my family, I took my first step as a social worker at the YWCA in 1965. I organized a class for young mothers who spent most of their time at home, raising their children, so they could get together and learn more about society or politics. It was an attempt to empower women in their lives by gaining more knowledge and making more decisions.

In 1970, I became a social worker for the Toronto Board of Education. In those days, Pierre Eliott Trudeau, the father of Justine Trudeau, the current prime minister of Canada, took office as prime minister, with the goal of realizing a harmonious multiethnic nation, like a mixed salad. This meant a society where all citizens could express their identity and co-exist peacefully, rather than separating them or forcibly integrating them. In order to support children of diverse backgrounds, diversity is needed for adults, too. Back then, I was the only social worker in Toronto who could speak Japanese.