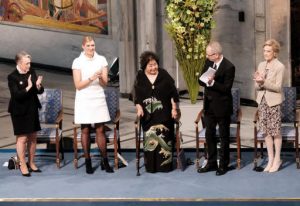 Last December 10, in Oslo, Norway, I took part in the award ceremony for the Nobel Peace Prize on behalf of the International Campaign to Abolish Nuclear Weapons (ICAN). I wore a dress that was made from a kimono left by my late mother. I was wishing that my husband Jim was still alive so he could see me at the ceremony.

In her acceptance speech, Ms. Thurlow talked about the tragic death of her 4-year-old nephew in the atomic bombing and stated that the use of the atomic bomb by the United States was a war crime. In addition to the nuclear nations, she criticized the nations under the so-called nuclear umbrella, calling them accomplices. Her speech, delivered with heart and soul after the speech made by Beatrice Fihn, ICAN’s executive director, was met with a powerful response from around the world.

I’ve been so moved by the heartwarming messages I’ve received from old schoolmates, friends, and relatives. They’ve made me feel that I can form new ties with my hometown of Hiroshima. As someone who has been involved in nuclear disarmament and peace education for a long time, I was also happy to receive essays about my speech that were written by a hundred students from Miyoshi High School. Their essays were written in both Japanese and English and it was very heartening to see that my message has been effectively conveyed to the younger generation.

At the same time, I also felt that I couldn’t say everything that I really wanted to say in my speech. Japan is the A-bombed nation and yet continues to call for the protection provided by the U.S. nuclear arsenal. And Canada is a member of the nuclear alliance known as the North Atlantic Treaty Organization (NATO). These “accomplices” didn’t even appear at the U.N. meeting to negotiate the nuclear weapons ban treaty. I wanted to call out my two mother nations by name and urge them to sign the treaty. But it was a speech designed to appeal to all the nations of the world and I think I did my best to convey my message in the given time and place.

Every time I write a draft for a speech, I remember those who perished in the atomic bombing and I can’t hold back my tears. It’s very painful to recall what I experienced 73 years ago. But I encourage myself with the thought that this is my mission to fulfill.

Having the honor of receiving the Nobel Peace Prize is neither the purpose of my efforts nor the commemorative gift for the life I’ve led. Rather, it’s something that I should simply take advantage of as much as I possibly can in order to accomplish my goal, just as I did 10 years ago when I was made a member of the Order of Canada by the Canadian government. The campaign for nuclear abolition is a political movement for the citizens of the world to call on their nations to change their nuclear policy. My colleagues and I are making our utmost efforts, in all possible ways, to influence Canada’s prime minister, Justin Trudeau.

It remains the beginning of the end of nuclear weapons. There is still so much to do and I have no time to bask in past accomplishments.