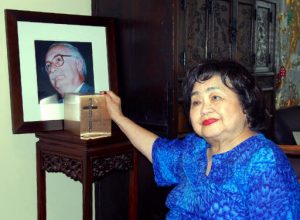 Sorrow and strength after loss of husband

Starting in 2010, a process to add “theoretical aspects” to the A-bomb experience was strengthened by concretely examining the question of what would happen if a nuclear weapon was used again. This process unfolded at a series of International Conferences on the Humanitarian Impacts of Nuclear Weapons, held three times under the auspices of the governments of Norway, Mexico, and Austria.

I attended the second and third conferences, where I delivered speeches, and these events made me feel that a large wave was being generated by governments and civil society to create momentum for the idea of outlawing these inhumane weapons. At the third conference, which took place in December 2014, although indirect words were used, the Austrian government issued a statement pledging to cooperate in efforts to establish a treaty to ban nuclear weapons. This is exactly what I had been hoping to hear for a number of decades. About 60 years had passed since I learned about Ichiro Moritaki’s antinuclear philosophy for the first time from the late Ichiro Moritaki. Haruko Moritaki, his daughter, also took part in that conference and we embraced and shed tears of joy together.

But honestly speaking, I felt both excitement and anger at that time because Japan and Canada, my two home nations, turned their backs on the treaty, which made their shameful attitudes toward nuclear weapons even more apparent. Japan took part in the meeting, in a superficial fashion, but only doused the discussion with cold water. I was appalled at its stance.

Around that time, she also came to feel deep appreciation for the loved ones who had impacted her life.

In April 2011, my husband Jim passed away. He was not only my life partner but also my comrade in my antinuclear activities. He looked over all the drafts of my speeches, and always gave me helpful advice. So, with his death, I lost my biggest supporter. Peter, my first son, now lives in the Middle East, where he works as an economist, and my two grandchildren have become adults. These days, Andy, my second son who lives near me, is lending his support to my activities. I have kept half of Jim’s ashes at home so we can still be together. When I join him one day, I hope our ashes will be scattered together into the Seto Inland Sea by my hometown. Turning my sorrow into strength, I’m moving forward with my journey in this life.

The other person I feel indebted to is the late Reverend Kiyoshi Tanimoto, my mentor. Unexpectedly, the efforts I’ve made in North America have been a journey to learn more about Mr. Tanimoto’s footsteps, too. Our views are not necessarily aligned, as I have continued to pursue the responsibility of the United States for dropping the atomic bombs on Japan. But I believe that he achieved something of real significance by traveling across the United States soon after Japan’s defeat in World War II and making Americans aware of the terrible damage wrought by the atomic bombings.

Four years ago, I received the Kiyoshi Tanimoto Peace Prize from the Hiroshima Peace Center. On that occasion I told Mr. Tanimoto, in my mind, that I had always been following in his footsteps.