In the Nuclear Superpower, 75 Years After the Manhattan Project, Part 4 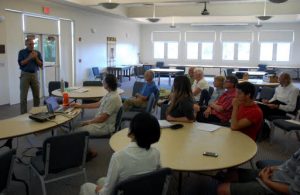 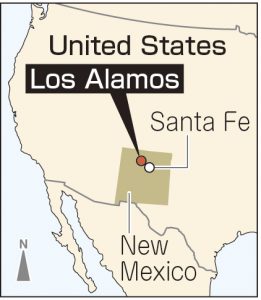 The streets of Santa Fe, the capital of New Mexico, are lined with beautiful adobe buildings. This city is the gateway to Los Alamos, where the U.S. government developed atomic bombs through the Manhattan Project in the early 1940s. Many people here still commute to Los Alamos, which is 60 kilometers away.

On July 2, citizens and members of the Los Alamos Study Group (LASG) gathered at a church in Santa Fe. LASG is an antinuclear group. Their first topic for discussion was the country’s nuclear policy. They then went on to discuss their efforts to counter “Atomic Summer.” This summer, a number of exhibitions, symposiums, and opera performances related to the Manhattan Project are taking place in Santa Fe. Among the supporters of these events are organizations that promoted the plan to designate some sites of the project as a national historical park. This series of events is being held under the catchphrase “Atomic Summer.”

Brian Moe, 38, said that this followed a trend of romanticizing negative aspects involving the history of the atomic bombs. According to Greg Mello, 68, the executive director of LASG, these events don’t involve fundamentally questioning the use of the atomic bombs or the current maintenance of the U.S. nuclear arsenal. The group is strongly opposed to President Donald Trump’s plan to resume the production of “pits,” which compose the core of nuclear warheads. LASG has been critical of the plan to designate the Manhattan Project sites as a national historical park. The sites are under the jurisdiction of the Department of Energy (DOE), which supports the country’s nuclear capability, and the exhibitions at the park cannot go against the policy of the DOE, they believe.

Two weeks after the gathering, Mr. Mello took action to protest “Atomic Summer.” He prepared fliers that featured a photo of the late Dr. Joseph Rotblat, who dropped out of the Manhattan Project and became devoted to the movement against nuclear weapons. Voicing opposition to resuming pit production, Mr. Mello handed out the fliers in the parking lot of a theater where an opera performance about Robert Oppenheimer, the physicist who led the effort to develop the atomic bombs, was taking place.

No explanation of A-bomb damage

Yasuyo Nugent, 41, who is originally from Fukuyama, Hiroshima Prefecture, feels uneasy about the festive mood of the series of events. Alarmed that the exhibition “Atomic History,” which opened at the New Mexico History Museum in June, does not refer to the damage that the atomic bombs inflicted on human beings, Ms. Nugent and her friends initiated some actions to promote peace. She was shocked to see the word “Boom” used in a magazine advertisement for “Atomic Summer,” since the word can describe both an explosion and a fashion trend.

She thought it was important that people be aware of the full reality of the atomic bombings and so, in front of the museum, she placed a large origami crane on her head and held a sign that said: “Any nuclear history is incomplete without facing Hiroshima - Nagasaki.” After this demonstration was covered by a local newspaper, a reader posted a comment at the newspaper’s website which argued that Japan’s wartime actions in China must be remembered as well. Ms. Nugent replied, “Exactly.” She believes that both Japan and the United States should take a serious look at their own country’s negative legacy from the war.

Some of the events held this summer give a certain amount of consideration to the emotions of A-bomb survivors, but people have too few opportunities to touch the survivors’ perspective, Ms. Nugent thinks. She is planning to seek the cooperation of the Hiroshima Peace Memorial Museum in order to hold an atomic bomb exhibition in Santa Fe.

“I hope people will come to disapprove of nuclear weapons and call for realizing lasting peace without them through learning about what really happened,” she said. Since Santa Fe is closely connected to Los Alamos, she wonders if it will be difficult to find a venue for the exhibition, but she says she won’t abandon this aim.