In the Nuclear Superpower, 75 Years After the Manhattan Project, Part 3 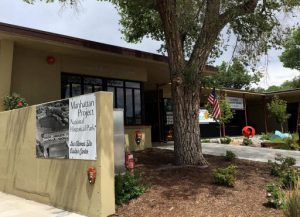 When the Manhattan Project National Historical Park was established in 2015, its purpose, as explained by the United States, involves presenting and passing on the significance of the development and use of the atomic bomb from various perspectives. The grounds and facilities of three major A-bomb-related sites have been designated and preserved as a national park, and efforts to improve these locations, so that Americans can learn about this history, have been steadily made.

I was concerned, however, about the exhibits and explanations that the park would use. In January 2017, the “Foundation Document” was issued by the National Park Service (NPS), under the U.S. Department of the Interior, which is responsible for administration, interpretation, and education at the park. That document earned a measure of legitimacy in the eyes of the A-bombed cities as it acknowledged the indiscriminate destruction caused by the atomic bombings and the lifelong effects from the radiation exposure that the survivors experienced.

I paid a visit to the park in Los Alamos, New Mexico, one of the three park sites. After observing the related facilities that are already open to the public, I realized that it would be premature for the A-bombed cities to feel optimistic about the park.

The small visitor center for the park is located by Ashley Pond in the town’s urban area, where residents come for recreation and relaxation. Panels provided by the Los Alamos Historical Society, which is noted as a “partner” of the NPS, were displayed with a simple explanation that the land was converted into a base for the nation’s aim of developing nuclear weapons, and of “the strenuous efforts” made by the scientists who were involved in the project.

“The atomic bombs ended the war”

Meanwhile, there were few materials on display about the actual use of the atomic bombs. There was only a reproduced pamphlet that warned Japanese citizens to “evacuate from the city immediately,” and information about the United States dropping the atomic bomb on Hiroshima on August 6, 1945 and the Soviet Union declaring war against Japan two days later.

“The two sides of the pamphlet dropped over Nagasaki prior to the A-bomb drop on the city,” reads the explanatory text. This seems to suggest that the United States takes no responsibility for the devastating damage caused by the atomic bomb because they had warned the Japanese in advance. However, according to the Nagasaki Atomic Bomb Museum, the pamphlet may have been scattered only after the attack took place.

A 20-minute video produced by the Atomic Heritage Foundation, a non-governmental organization, is also being shown in the visitor center. In this video, a renowned historian says, “The dropping of the atomic bombs on Japan, which followed from more than a year of systematic fire bombings on Japanese cities and was not more destructive than this fire bombing, brought an end to a long and terrible war.”

In Los Alamos, five locations have been designated as parts of the Manhattan Project National Historical Park. They are found on the vast property of the National Laboratory, which today remains a base for the nation’s nuclear development activities and is not open to the public. However, visitors can instead move to the science museum affiliated with the National Laboratory to see panels that explain these five locations, the Los Alamos Historical Museum, and other related areas, starting from the visitor center. This is the suggested route for learning about the development of the atomic bomb.

These facilities may enable visitors to learn about the history of U.S. nuclear development, but the lack of content on the A-bomb victims makes it difficult to feel their suffering.

Park budget has been cut

Local members of Congress and non-governmental organizations promoted the park project. Their original aim was solely to hand down the legacy that the United States, alone among nations, was able to make this monumental achievement in science technology. The cities of Hiroshima and Nagasaki have expressed concern about justifying the use of the atomic bombs and are pressing the United States to also convey the damage that was wrought by the A-bomb attacks.

The current conditions of the park seem to contradict the initial stance of the “Foundation Document.” I contacted the NPS to ask whether they would alter these exhibits in the visitor center in the future, but I have yet to receive a reply. It is said that implementation of the plan has been slow because the NPS budget was cut under the Trump administration, and Congress is now showing little interest.

After returning to Japan from my travels in the United States, I shared these current conditions at the park with Yasuyoshi Komizo, the chairperson of the Hiroshima Peace Culture Foundation. In 2015, Mr. Komizo, as a representative of Hiroshima, was invited to a forum that was hosted by the NPS before the park opened. At this forum he appealed directly for the requests of the A-bombed cities. “The ‘Foundation Document’ doesn’t settle everything,” he said. “We have to call on them to convey the consequences of the atomic bombings.”

Manhattan Project National Historical Park
The National Park Service, under the U.S. Department of the Interior, and the Department of Energy, which is in charge of the maintenance of nuclear weapons in the United States, jointly established the Manhattan Project National Historical Park in November 2015 to preserve the remains of the atomic bomb project. Of the sites and facilities in Los Alamos, New Mexico; Oak Ridge, Tennessee; and Hanford, Washington which officially make up the Manhattan Project National Historical Park, 13 are now being preserved at the Los Alamos National Laboratory, including the facility that built the Hiroshima bomb. While the NPS is responsible for the exhibits, the Department of Energy owns and manages all the facilities in the park. Some areas are off limits to the public. Some facilities are contaminated with radioactivity and decontamination remains an issue.