In the Nuclear Superpower, 75 Years After the Manhattan Project, Part 1 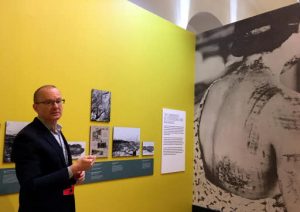 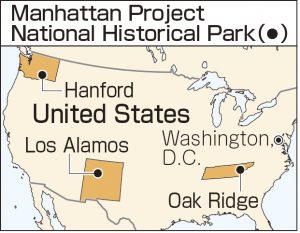 Exhibitions, past and present

The atomic bombs dropped on Hiroshima and Nagasaki were developed through the Manhattan Project, a national effort secretly carried out by the United States during World War II. It has been 75 years since the Manhattan Project began to be pursued in earnest. From what sort of perspectives will the use and consequences of these nuclear weapons be conveyed to people in the future? To consider this question, I paid a visit to the nuclear superpower, now under the administration of President Donald Trump, prior to this year’s anniversaries of the atomic bombings.

In Washington, D.C., the U.S. capital, an exhibition with a rather mysterious name is taking place. “Secret Cities” is the title of the exhibition held at the National Building Museum, which is located close to government institutions including the Federal Bureau of Investigation (FBI).

The “secret cities” refers to the main development centers of the Manhattan Project: Los Alamos, Oak Ridge, and Hanford. The construction of laboratories, manufacturing facilities, and infrastructure for a total of 125,000 people began in a full-fledged effort around 1943 and was completed in a hurry. These efforts made the use of the atomic bombs possible in just over two years.

Providing a detailed explanation of the exhibition panels, Martin Moeller, 57, a senior curator at the museum, said, "While scientific, military and political importance of the Manhattan Project have been widely recognized, less well known is its significance of in the history of architecture, engineering and planning. This exhibition explores how the three new cities built for the Manhattan Project served as proving grounds for emerging ideas about building and communities."

Some of the comfortable-looking residences constructed for the workforce were greatly influenced by the Bauhaus, a style of modern design that originated in Germany. Although the workers were made to observe confidentiality, good recreational facilities were offered. Rows of houses on curving streets became a model for housing development in the United States.

Controversy over past exhibition

There were 280 photos and panels on display. I was impressed by the fact that some of them, though the number was small, were images of the impact that the atomic bombs had on the victims. One photo showed a woman who had been branded on her back with the pattern of her kimono as a result of the bomb’s heat rays. Mr. Moeller said that an exhibition on the development of the atomic bombs should also acknowledge the harm that these bombs brought to human beings.

He said, "I debated myself, how much coverage do we need on Hiroshima and Nagasaki. Fundamentally, this is not an exhibition about Atomic bombing, but we have to talk about the bomb because that was what they were doing and the consequence of that. I want to make sure that the photo of the woman was big, what I wanted to make a point is that there was a human tool there. That wasn’t the first thought I had. Our job is to try to present an objective stories, tell stories hat factually into conveying the range of issues and so on. I’ve been working for a while and then the thought of the exhibit, the cancellation of the exhibit in 1990’s occurred to me and thought, are we going to have the same issue? But I am gonna do my best to convey this objective information. So far, that doesn’t seem to come up… yes, I was very conscious of it, but haven’t had anyone coming and saying “how could you do this?” We’ve got some comments, but honestly, less criticism than expected."

The plan included borrowing artifacts and photos related to the atomic bombings from the peace museums in Hiroshima and Nagasaki and displaying these at the exhibition. But U.S. veterans groups were vigorously opposed to the plan, arguing that the atomic bombs helped end World War II. The director of the museum was removed from his post, and only part of the bomber ended up on display in 1995. This incident revealed how difficult it was to convey the inhumane consequences of the atomic bombings in the heart of the United States. And it was a bitter experience for the people who were involved in this plan, both in the United States and in Japan. The fuselage of the B-29 bomber is now on display in an annex of the Air and Space Museum, with basic information regarding its dimensions, such as its wingspan.

“Was the development of the atomic bomb necessary?”

Cynthia Kelly, 72, said, "Most people who are most sensitive about that, the veterans themselves and their families, the veterans are dying, very, world war 2 veterans everywhere, you know, the youngest are now in their early 90’s , and many many more are 100 and more, if they are still alive. But many of them are sadly passing. So the issues are easier because not so many feel strongly and not as personally offended by saying something, more sympathetic to the Japanese and they might say themselves." She is head of the Atomic Heritage Foundation, which is based in Washington, D.C. and dedicated to the preservation and interpretation of the Manhattan Project. She is one of those who played a central role in calling for the facilities involved in the Manhattan Project to be designated a national historical park. Three years ago, this national historical park designation was made for the remaining facilities in Los Alamos and two other locations including an atomic bomb assembly plant.

In the United States, more efforts have recently been made to interpret the history of atomic bomb development from that nation’s viewpoint. Can Americans and A-bomb survivors share part of their wishes? Will the lessons learned from the reality of the atomic bombings be put to good use in the future?

In referring to the creation of the Manhattan Project national historical park, the “Secret Cities” exhibition quotes the words of Major General Leslie Groves, who directed the Manhattan Project: “To the question, ‘Is atomic energy a force for good or for evil?’ I can only say, ‘As mankind wills it.’”

With regard to perspective on the atomic bombings, it seems there are still high barriers to overcome.

The Manhattan Project
The Manhattan Project was the U.S. program to research and develop the atomic bomb, ordered by President Franklin Roosevelt and led by the Manhattan Engineer District, which was established within the U.S. Army. In the spring of 1943, a laboratory was established in Los Alamos, New Mexico, where the atomic bombs were designed and produced. Uranium enrichment was carried out in Oak Ridge, Tennessee, and plutonium was produced in Hanford, Washington. The first atomic bomb test was conducted at the Trinity Site in New Mexico on July 16, 1945. A uranium-type bomb was dropped on Hiroshima on August 6, and a plutonium-type bomb on Nagasaki on August 9. Los Alamos and Oak Ridge are still nuclear development centers.