In the Nuclear Superpower, 75 Years After the Manhattan Project, Part 2 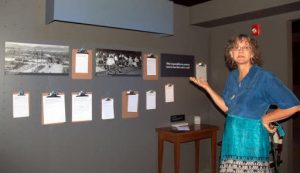 Fate of the A-bomb exhibition at Los Alamos

After climbing up the slope of a rocky mesa, I reached the top and had a striking view of the town of Los Alamos, New Mexico. Los Alamos is the place where the atomic bomb was developed. In one corner of the town is a small one-story building where Major General Leslie Groves stayed during his time as director of the Manhattan Project. That building has now become the Los Alamos History Museum.

The museum relates the local history of the area, starting from the period when Native Americans inhabited the land. It also has a section that focuses on the development of the atomic bomb and the damages that it wrought, and asks visitors to share their reflections and contribute their thoughts by posing this question: “What responsibility do scientists have for how their work is used?” It is a place where a variety of perspectives on a complicated history can be considered.

In February of this year, the people of the A-bombed cities felt some frustration in connection with the Los Alamos History Museum. The cities of Hiroshima and Nagasaki had been working with the museum to hold an A-bomb exhibition there in 2019. However, according to information provided by the Hiroshima Peace Memorial Museum, the museum in Los Alamos informed the two cities that the exhibition would not be held in line with that plan.

What lies behind this development? I visited the Los Alamos History Society, the organization that operates the museum, and spoke with Heather McClenahan, 51, the executive director. Ms. McClenahan said, “The travelling exhibit has not been cancelled. It was never scheduled by the Los Alamos History Museum. We were simply having discussions about hosting it.” These remarks, however, are perplexing because originally the plan for the A-bomb exhibition was moved forward on the Japan side when the museum in Los Alamos expressed interest, in October 2016, to serve as co-sponsor of the event.

With regard to the explanation about the museum’s decision that was communicated to the Hiroshima Peace Memorial Museum, Ms. McClenahan said, “Those discussions were part of a bigger program that was to be funded by a grant from the U.S.-Japan Foundation. Our board of directors had only one week to make the decision after they found out about the possibility of the exhibition until the grant application was due. They didn’t feel they had enough time or information to make a wise decision.” In February, the former director of the museum resigned, which has spurred speculation of strains within the organization.

One source said that local residents there might be offended if the exhibition conveys only the straightforward message of nuclear abolition because many of them are highly aware of the complexity of the issues involving nuclear disarmament and nuclear non-proliferation. In addition, the board of directors were concerned about the exhibition because the museum relies heavily on private donations and the event could put off donors.

There are challenges to holding A-bomb exhibitions in the United States, and particular at Los Alamos, as this place was the “core site” of the atomic bomb development. But it seems clear that the exhibition has not been completely cancelled. Ms. McClenahan said, “We do believe that within the next couple of months we will probably be able to announce that the exhibition will be able to come to New Mexico. From what I understand, these exhibitions are held alternately in the United States and Europe, every other year, so our next opportunity, and that’s what I’m shooting for right now, is to have it in 2021. That would be the goal.”

Still, how would the exhibition handle the appeal to eliminate nuclear weapons from the earth, the long-running wish of the people of the A-bombed cities, a desire that cannot be compromised? Ms. McClenahan said firmly, “In Los Alamos, where people work on nuclear weapons every day, the idea of abolishing them is a dream, far off in the future. She continued, “In order to communicate these different experiences, different ideas, it’s going to take a long time and a lot of work. It is not that they are against the goal, it is that they have many questions about it. They want to have context provided and programs offered that would delve into these issues.” She went on to say, “just like Los Alamos needs to be open to hearing the stories of what happened in Hiroshima and Nagasaki, I think Hiroshima and Nagasaki need to understand the people here as well. They weren’t monsters. They were people who thought that they were doing their part to help win the war and were working to save lives in the long run.”

As a rule, the Hiroshima Peace Memorial Museum says that it is open to forming a partnership with any nation as long as that nation shows interest in holding an exhibition. However, there is the possibility that a U.S. partner might prepare another sort of exhibition concerning nuclear weapons in parallel with the A-bomb exhibition.

Responding to a request for an interview, the former director of the Los Alamos History Museum said that she was unable to speak for the decisions made by an organization where she no longer works. However, she recently sought cooperation from citizens in the United States and Japan, including second-generation A-bomb survivors, to form a citizens’ group. She said that dialogues involving historical perspectives would continue within this group at a grassroots level. The group’s website refers to a statement made by Clifton Truman Daniel, the grandson of Harry Truman, who was U.S. president at the time of the atomic bombings. Mr. Daniel has been active in interactions with A-bomb survivors. His statement reads: “We rejoice in the lives saved in World War II while acknowledging and honoring the suffering of the people of Hiroshima and Nagasaki.” There seems to be a strong belief that the atomic bombs saved the lives of Americans. It seems the gulf between the people of Japan and the people of the United States, when it comes to perspectives on the atomic bombings, remains wide.

Hiroshima Nagasaki A-bomb exhibitions
Exhibitions co-hosted by the cities of Hiroshima and Nagasaki have sought to bridge the distance, with regard to awareness of nuclear arms, between the A-bombed cities and nations overseas. In 1995, an A-bomb exhibition was planned by the Smithsonian National Air and Space Museum in the United States but later cancelled because of protests. Subsequently, though, another A-bomb exhibition took place at American University, driven by citizens’ efforts. Since then, A-bomb exhibitions have been held in 47 cities in 18 nations. The main content of the exhibition consists of 30 panels that describe the damaging consequences of the atomic bombings, along with an appeal for the abolition of nuclear weapons and 20 A-bombed artifacts. In addition to exhibitions sponsored by the two A-bombed cities, groups of Japanese nationals living overseas, as well as peace groups abroad, have organized a number of A-bomb exhibitions with the cooperation of the Hiroshima Peace Memorial Museum.