Hello from UNITAR: Offspring of A-Bombed Trees to the World 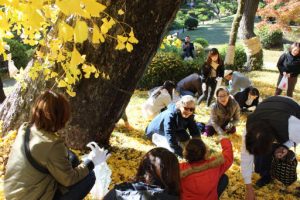 UNITAR Hiroshima Office cooperates with “Green Legacy Hiroshima (GLH),” which delivers offspring of A-bombed trees to the world with a message of peace.

On November 24, volunteers gathered seeds of A-bombed ginkgo tree in the Shukkeien Garden and kurogane holly trees in the Hiroshima Castle, in Hiroshima City. The trees survived even with a huge hollow and tilt due to the damages of the A-bomb. They bear full fruit and put forth leaves every year. It was once said that the burned ruins of Hiroshima would produce no greens for 75 years, which betrayed our expectations in a good way. New seeds and buds of the A-bomb always remind us of hope for the future and the strength of nature to live on.

GLH has sent seeds and saplings of A-bombed trees to over 30 countries around the world since its establishment in 2011 by an NGO, ANT-Hiroshima and UNITAR. The seeds that have been picked recently will be cared by the tree doctor and then kept at the Hiroshima Botanical Garden until they will be brought to the partners.

Ms. Nassrine Azimi, GLH coordinator and Senior Advisor of the UNITAR Hiroshima Office, described the event as, “The spectacle of the trees, elegant against the crisp blue sky, was breath-taking.” She continues, “We were overcome with emotion, as we watched our vastly diverse and ever-expanding GLH family joyfully pick the seeds from the generous, gentle Hibaku Jumoku-one simple but deep way to share with the world the fruits of the soil, and the longing for peace, of Hiroshima.”